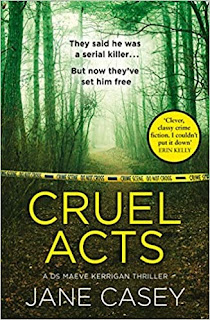 Jane Casey is an Irish author of two mystery series, one for young adults. Her contemporary police procedural series of thrillers with Detective Sergeant Maeve Kerrigan in London has won critical and reader praise. The eighth title Cruel Acts (Harper Collins, 2019) was a finalist for the 2020 Ned Kelly Award for International Crime Fiction and was named the Irish Independent crime fiction book of the year.

The police thought they’d gotten a killer off the streets when Leo Stone was convicted of murdering two women. He was suspected of killing a third one but her body was never found and there was not enough evidence to include her name in the prosecution. Now a year later the case is being re-opened because a flaw in the original proceedings has allowed Stone to walk on appeal. Maeve and Detective Inspector Josh Derwent are assigned to review and re-investigate the case against Stone and make it airtight for a second prosecution.

Maeve becomes increasingly unsure that Stone actually did commit the murders based on the evidence that they have. And she is just as convinced that the third woman whose blood was found in a room that Stone used should have been considered one of his victims. The publicity surrounding the first trial is a definite hindrance to locating witnesses whose memories are not tainted by time and lurid news articles. Then a fourth woman disappears when Stone has an unassailable alibi.

Complicating Maeve’s life is Detective Constable Georgia Shaw, who is after Maeve’s job and isn’t above dirty tricks to get it. In addition, Acting Detective Chief Inspector Una Burt, who is backfilling while Superintendent Charles Godley is on leave, knows she isn’t as well liked as Godley and goes out of her way to justify the barely hidden dislike of the staff. The backbiting and microaggressions of an office environment are well described, in addition to their clear impact on efficiency and morale, in this case on Maeve’s.

I am not a fan of serial killer crime fiction but this entry in the series is really good and I understand the accolades it’s received. Maeve is a great character, hardworking, imaginative, and focused. The high-speed intense plot drives to a bombshell surprise ending, that was hinted at here and there. While reading the series in order is not essential to following the plot, I think I missed some of the nuances among the characters by not having read some of the earlier books. For fans of police procedurals and British detective stories.