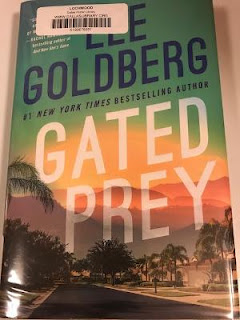 As the third book in the series, Gated Prey, begins, Los Angeles County Sheriff’s Detective Eve Ronin and her partner, Duncan Pavone, are working undercover out of a house in Calabasas. The house is a McMansion type of deal to fit their roles of beautiful trophy wife/girlfriend and rich old man. There have been numerous attacks on homeowners behind the gates of their exclusive communities so the undercover operation is important. Duncan, who is weeks away from retiring, plays his part to the hilt thanks to his do clothing and the walker he uses to shuffle around in public as he flashes cash. The plan is to get the take down the three-armed home invasion robbers who have been conducting their own increasingly violent redistribution of wealth campaign.

The plan works…and almost gets Eve and Duncan killed in the line of duty.

When the carnage stops and the smoke clears, Eve and Duncan soon realize that the failure of backup officers to arrive on time could have been far more than accidental. Being the youngest detective as well as how Eve goes about things could have had deadly consequences. That ongoing resentment and internal threat has not gone away either.

Then there is the case itself. Dead suspects tell no tales and Eve and Duncan are left still looking for answers regarding how the armed robbers came and went from gated communities, what they did with stuff they stole, and many other questions.  It also becomes clear that these guys were working at the behest of at least one person who has yet to be identified.

Completely ignored on the book jacket copy is the second case which involves a fetal abduction. Called out on what appears to be a still birth due to a late term miscarriage, it soon becomes clear that something far more horrible is going on. Little can be said about this case without creating spoilers, but readers should be are aware of the topic as this will be triggering for some readers. Parts of this case was tough to read.

Overall, Gated Prey by Lee Goldberg is an enjoyable police procedural that continues to build on the foundation laid by Lost Hills and Bone Canyon. This remains a series that should be read in order. The complicated backstory to the Eve Ronin character as well as her previous actions in earlier cases are repeatedly referenced as this read moves forward. Not quite at the same level of the previous book as this one reads differently in an unexplainable way, Gated Prey by Lee Goldberg is still very much worth your time as is the series.

My reading copy in print format came from the Lochwood Branch of the Dallas Public Library System.