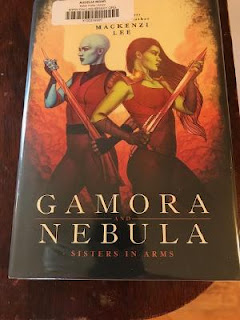 Gamora And Nebula: Sisters In Arms by Mackenzi Lee tells a story from two different points of view. Gamora and Nebula are the daughters of Thanos which is a different character than the movies. In the comics and in this book, Thanos is in love with Death, who has a physical form and is female, and is trying to get her back as they have a love/hate relationship. Abusive warlord wants what he wants and he manipulates his daughters, who do not get along at all, so that they go to the planet, Tordune, on separate missions to steal an object its core. Tordune is a polluted and dying world that once was a lush green planet until a valuable energy source was discovered beneath the surface. Mining has decimated the world and now the population is oppressed by a massive corporation known as the Mining Corporation.

In exchange for help to get to the core of the planet, Gamora allies herself with the rebels that are attempting to free their world from the Mining Corporation. At the same time, Nebula arrives on planet and allies herself with the Universal Church Of Truth (a cult). She agrees to “diplomatically” deal with the rebels so that the Church can continue to profit off the energy source through their controlling interests in the Mining Corporation. Like her sister, she is using this connection to get help to travel to the core to recover the object. Both sisters individually soon suspect that the object in question is far more important than they were told and have to decide if they will fight or work together.

The story being primarily told through two different perspectives that have very different personalities makes this read interesting. Thanos has raised his daughters to see each other not only as his personal living weapons, but as a direct threat and another face of competition. He has thoroughly and repeatedly traumatized both girls as they grew up and each sister has a different reaction to that ongoing trauma. The tale is heavily defined by their sibling relationship which frequently leads to some predictable cliches.

Gamora And Nebula: Sisters In Arms

My reading copy came from the Audelia Road Branch of the Dallas Public Library System.