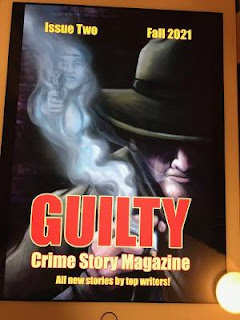 With the recent news that one can now preorder issue three currently scheduled to drop Sunday, I thought I would remind you today of this quality magazine with my review from back in September. You can also read my review of the first issue here.

Guilty Crime Story Magazine: Issue 2, Fall 2021, opens with “At Fury Crossing” by Brent Spencer. Hella, a homeless vet, put her military skills to work to help Cliff. It was a job and nothing more. Now as she watches him get increasingly agitated outside the hotel known as “The Smiling Orchid,” she realizes she may have to get much more involved than she would like in order to again save lives.

Harlan had a skill to separate people from their money. The problem was that he talked big, but nothing ever came of it. Now he has gone and fled town and left Madison White holding the debt in “Newfound Gap” by Adam Leeder. They can’t find Harlan. They can find her and her son, Jackson, and mean to collect the money. One way or another.

Ted has to die in “Matter of Conscience” by Marie Anderson. Nancy met him at her sister’s wedding. She has her reasons why he must die that slowly become clear.

Editor Brandon Barrows is up next with “Between Friends.” Mike is tending bar, a gambler, and in a world of trouble. He needs a miracle. He might have found it in Mr. Steinberg. Surely Nr. Steinberg, who has known him for years, will help once he explains his problem in enough detail.

Abby took the shot in “No Recoil” by M. E. Proctor. A man is dead. The reasons why are at the heart of short this tale.

“Learning To Dream” by Stanton McCaffery comes next where life sometimes goes in unexpected ways. Graduating along with some other folks in the class of 2000, life is tough. Things escalate way worse when cancer and then a brutal accident strike the characters in this dark tale where the dream might be an illusion.

Crooked cops Lafitte and Asimov have messed up a deal as “Them Cops” by Anthony Neil Smith begins. Time for some payback. To do that, our narrator first needs an untraceable gun.

The issue closes with a nonfiction piece, “American Nightmare: The Noir Roots of Sandman Mystery Theatre” by Anthony Perconti. The essay considers the reboot of the Golden Age hero, the Sandman, as he works in a noir style landscape in a city in the throes of the Great Depression. It is an interesting piece.

Guilty Crime Story Magazine issue 2, Fall 2021, is another interesting read as was the first one. This issue is darker in tone and consistently more noirish, no matter how you define noir, than the first one.

This issue also has several formatting errors in the way it presented on my iPad. Some sentences started with two or three words and then had the rest of the sentence on the next line. While somewhat distracting, it was not that big of an issue though it may very much irritate some readers.

Regardless of that, the issue is a good one and well worth your time. Interesting characters, often dark and complicated situations, combine together to create tales well worth reading.

I picked this up in early September to read and review.

I have really lost track of the ss writers out there.

I have some rough idea, but I think I have lost track quite a bit as well. Not just short story folks, but pretty much everything across the board.