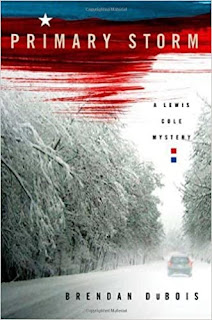 Brendan DuBois is a talented author of mystery, fantasy, and science fiction. He’s written dozens of short stories as well as novels. His work has been awarded the Shamus three times, the Barry and the Derringer two times each, and nominated three times for the Edgar. Most recently he’s teamed up with James Patterson as co-author of three books.

DuBois introduced former Department of Defense analyst Lewis Cole in 1994 and has since produced 10 more titles about his adventures. After his DoD career Cole retired to the small town of Tyler Beach, New Hampshire, where he writes for a local magazine but he seems to become readily entangled in more complicated matters.

In Primary Storm (Minotaur, 2006) the presidential fever that strikes New Hampshire every four years is in full bloom. White House hopefuls swarm the small state and local journalists have access to them that media representatives elsewhere only dream about. When Lewis shows up for a speech by Senator Jackson Hale, by all accounts a strong contender for the nomination, he thinks he’s just there to look the candidate over but ends up being arrested for attempting to kill Hale when shots are fired during the rally and Cole’s revolver is found on the scene. Cole’s lawyer gets him out of jail but who is setting him up is a question that needs to be answered.

A well-written and engaging read on more than one level. I live in another part of the country that is also highly political, and I can attest to the accuracy of the election madness as it’s portrayed here. Telephone calls at all hours, flyers in the mailbox, door-to-door canvassers, and signs everywhere: on cars, in yards, along the streets. Overwhelming until the day after the polls, when it thankfully stops. The minor thread with the campaigner who just wants to go home resonated with me.

Cole has acquired a love interest in this book and the romance is woven into the investigation better than a number of stories I’ve read. Not only is the would-be killer well disguised, the motive is thoroughly hidden until the last few pages. Politicians make a lot of enemies! A good series to have on any mystery reader’s TBR list. Definitely bingeworthy.