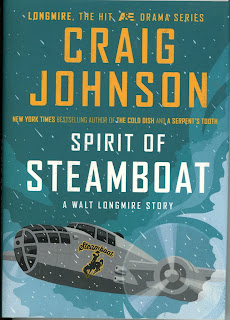 With Christmas coming tomorrow, it seemed a good time to remind you of this very good seasonally appropriate read.

The Tuesday before Christmas brings snow, relative quiet, and no real plans for Sheriff Walt Longmire other than his annual rereading of A Christmas Carol. That is until the quiet dark haired woman toting a garment bag walked into his office. Eventually it becomes clear that she wants to see the former Sheriff, Lucian Connally. The woman claims to have something that she would like to return to him.

Lucian is living at the “Durant Home for Assisted Living” and could probably use a visit from somebody besides Sheriff Walt Longmire and Dog. Not only is the home’s television another victim of Lucian’s legendary temper having died by gunshot, the man is not in the best of moods because it is Christmas and he has been drinking quite a bit. He has no idea who the mystery woman is either until she says “Steamboat.”

What follows is an incredibly suspenseful flashback tale of a flight to save a child’s life against the odds---medical and environmental. On Christmas Eve in 1988 an aging WWII plane and a cast of locals including the recently retired Lucian and first year Sheriff Walt Longmire pulled off a Christmas miracle. Though readers can surmise from nearly the start that the dark haired woman was that child, there is plenty of suspense in how the flight happened and why she is back now.

While Spirit Of Steamboat: A Walt Longmire Story is a short book as it is a novella, it is a powerful and deeply moving book. Craig Johnson brings alive the storm, the people, and the history of a legendary aircraft in a way that few novelists could do. The resulting 160 page book might simply be the best thing the man has ever written.

You can also read Lesa Holstine's take on the book here.

I agree with you, Kevin. Spirit of Steamboat might be Craig Johnson's best work. Thanks for linking to my site!