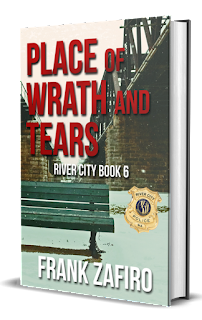 Place of Wrath and Tears: River City Book 6 by Frank Zafiro deals primarily with the trauma of a school shooting. The event is depicted through the point of view of several of the characters involved, including the shooters, and the officers who respond. As such this is not a book for everyone as for some it will come way too close to home.

It begins the morning of September 18, 2001 just a few days after the horrific attacks on New York City and elsewhere. Officer Katie MacLeod has just moved to the day shift after years on the graveyard and is having a hard time getting used to her new call sign and platoon mates. Dispatched to a call of a suspicious person she does not expect it to be much more than a noisy neighbor complaint over nothing.

She would be wrong.

Jimmy Ryan has no dad around, a mom too drugged out to care about much of anything, and a special needs sister who attends the same high school he does. That means he can keep an eye on Lizzie.  He does his best to protect her. When she is threatened and with no other options, he resorts to getting a gun to protect her.

Gary Palouse has both of his parents though he might be way better off, as would his mom, if his bully of a father was not around. His father is a domestic abuser that uses bullying and violence to discipline his family. Dear old Dad has no idea the level of rage that is building inside his teen son. Nor does he have any idea that Gary has couple of friends, Ronald “Ringo” Moore and Will Peterson, to a lesser extent, also hate the world and everyone in it.

These storylines and others lead to a traumatic day at a local high school. The first half of the book deals with various things leading up to the shooting while the second half deals with how it changes the lives of so many in the days, weeks, and moments to come.

While I am a big fan of the series, I can not say I enjoyed this read. As a parent of two boys, one of which was named as “not to be killed” on a list by a troubled teen when both were in high school, I am keenly aware of how close we came to a tragedy. There is nothing quite like the experience when, as a parent, you meet with school administrators and detectives so that they can question your son regarding being placed on such a list. Thankfully in our case, somebody said something, and the kid involved got the help he needed.

As a multiyear school district employee, I also saw it from the other side as I went through the mandatory school shooter training which included frequent practice drills regarding shelter in place and evacuation. Those drills are their own trauma and have long lasting impacts on some students.

So, I have seen a few things from both sides of the situation, and that no doubt massively impacted my read of this book. A read that I have just scratched the surface of so as to not inadvertently create spoilers. There are many interwoven plot strands in this read and to go into any detail beyond the above brief description above would create issues.

In short, Place of Wrath and Tears: River City Book 6 is another well written and complicated tale from Frank Zafiro. One would not expect anything else from this author. The subject matter is difficult and the author handles it well. It is not a book for everyone. It is also not a read one can easily forget.

Digital ARC supplied by the author long ago with no expectation of review.