Please welcome Elizabeth Elwood to the blog today as she explains how her short story, Number 10 Marlborough Place, came to life in the current issue of  Ellery Queen Mystery Magazine. 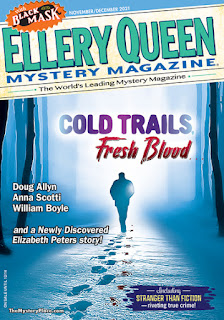 Having been born just after the Second World War, I seem to have reached the time of life where my childhood memories are other people’s history. On the plus side, from the writer’s point of view, this gives me a rich treasure chest to draw on when searching for inspiration.  Of course, I only remember the aftermath of the war: the food rationing, the blackout curtains in the attic, playing with my brother on the rubble of bombsites, and my grandmother irate over the bottle of brandy that she had nursed ‘for emergencies’ all through the war, only to have it stolen by a burglar before any of the family could enjoy it.

I had never bothered to tap this fund of memories before, but recently, there have been an abundance of series set during the fifties which, either annoy me because of inaccuracies, or delight me because they trigger memories long buried away. The latter, most notably, came from the Netflix production of The Crown when I watched the episode on the Great Smog of London which occurred in December, 1952.

Having startled my husband from his nap by squealing, “I remember that!”, I paused the show for a moment and let my eyes turn inward. The television screen morphed into a blur and I became lost in the past. There was a dank chill in the air and I could feel my mother wrapping a scarf around my nose. We were moving slowly along the street. Paving stones appeared beneath my feet, but I was surrounded by a yellow haze that obliterated houses and hedges and everything that was familiar. The image came back so vividly, all those years later.

After we had watched the rest of the show, I found myself recalling two other events that seemed connected to my memory of the fog. One of these was a terrible three-train collision at the Harrow Wealdstone station. My best friend’s father had been in one of the coaches and everyone in the neighbourhood had been shocked at the dreadful destruction. I had walked up the road with my mother and brother to see the wreck, and the towering pyramid of coaches soaring above the station was still impressed on my mind. Curious to know why I had connected the two events, I googled the crash to see what I could find online. It had occurred in October of 1952, only two months before the Great London Smog, and still is listed as the worst peacetime rail crash in the United Kingdom.

The second vivid memory that came rushing back was the fear run rampant when the murderer John Reginald Christie was on the loose. Once again, Google came up with the significant dates. Christie had been responsible for the disappearance of several women over the course of the previous decade, but the horror of the discoveries at 10 Rillington Place burst onto the news in March of 1953 and mesmerized the country until he was apprehended at the end of the month.

So it appeared there had been three dramatic incidents, all in one winter, lurking in the background of my normal childhood life. Of course, they were all secondary to what really counted: playing with our friends; doing schoolwork; buying gobstoppers and sugar mice when we stopped at the newsagent to pick up our Girl and Eagle comics; making sure our mother knew which Famous Five book we wanted for Christmas; and most exciting of all, going to see the pantomime put on at the Kodak factory. But all these years later, those events called to me. What an exciting challenge to weave a story that ran through that cold, anxious winter. And how thrilled I am to see it now in the November/December issue of the Ellery Queen Mystery Magazine. “Number 10 Marlborough Place” contains many blasts from the past within the mystery. I hope you enjoy it. 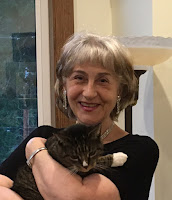 A former English and drama teacher, Elizabeth Elwood spent many years performing with music and theatre groups and singing in the Vancouver Opera chorus.  Having turned her talents to writing and design, she created 20 marionette musicals for Elwoodettes Marionettes and has written four plays that have entertained audiences in both Canada and the United States.  She is the author of six books in the Beary Mystery Series and her short stories have been featured in EQMM and mystery anthologies. Born in England, Elizabeth lives on British Columbia’s beautiful Sunshine Coast. Visit her website at https://elihuentertainment.com/

Enjoyed the story behind the story. Thanks, Kevin, for hosting Elizabeth and introducing folks to a talented writer.

I love reading authors' accounts of their writing process. Thanks for posting! I'm reminded of something Flannery O'Connor once said: “Anybody who has survived his childhood has enough information about life to last him the rest of his days.”