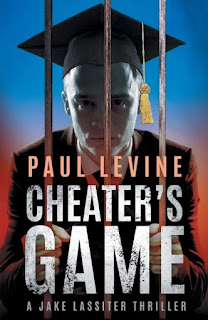 Paul Levine is a former journalist and lawyer who lives in Florida. He has won the John D. MacDonald Fiction Award and been nominated for the Edgar, Macavity, International Thriller, Shamus, and James Thurber awards. His publishing career began in 1990 with the first novel about Jake Lassiter, a lawyer in Miami, Florida. Both Levine and Lassiter are graduates of Pennsylvania State University, where the fictional Lassiter played football for the famous Joe Paterno. Lassiter went on to play professional football with the Miami Dolphins. Levine’s most recent legal thriller about Lassiter, the thirteenth, is dedicated to Paterno.

Cheater’s Game (Herald Square Publishing, 2020) highlights the recent college admissions scandal in which wealthy parents bribed top universities to admit their children who otherwise would not be accepted. Jake Lassiter comes out of retirement to defend his 20-year-old nephew Kip who has been accused of taking SAT tests in the place of college applicants. Max Ringle, the mastermind of the bribery and testing scam, turned informant as soon as he realized the FBI was investigating and made Kip his scapegoat.

Lassiter is hardly at the top of his game. His past as a football player has caught up with him and he’s been diagnosed with progressive brain damage. His doctor and fiancé Dr. Melissa Gold does her best to bolster him for the strain of the job he’s undertaken, but the stress of defending his nephew exacerbates his visible symptoms. He can’t always control them in the courtroom. His scenes with the unpredictable Federal judge trying the case are among the best in what is a very good legal thriller. Of course the pivotal segment is Lassiter’s questioning of the wealthy entitled parents and their spoiled children, most of whom were not charged. They show themselves to be positively despicable, presenting them as blameless in a racket that could not have existed without them.

A secondary theme is the largely unrecognized but widespread brain trauma so many football players suffer; the story relays a great deal of data about chronic traumatic encephalopathy (CTE). The attempts of interested parties to spin the research findings to their own benefit and to the detriment of the players are highlighted. Unfortunately this part is probably fact-based too.