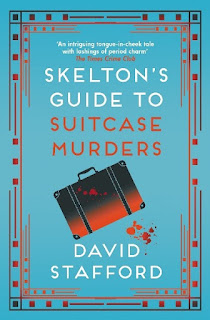 I seldom burble about books, having read too many to think that they are all exceptional, but I find myself burbling about the second book in the Skelton’s Casebook series by David Stafford. I cannot remember who was so ecstatic about the first book that I felt compelled to find the sequel but I located Skelton's Guide to Suitcase Murders (Allison & Busby, 2021) and was straightaway enthralled.

Set in 1929, this series follows the career of barrister Arthur Skelton, who had the reputation of salvaging the most hopeless of defenses. In this book a woman’s corpse is found in a suitcase and her husband, an Egyptian doctor, is accused of killing her. She was believed to have been straying from the marriage, and potentially incriminating materials are found in their home. There was no real evidence against the doctor and the condition of the corpse was such that identity could not be categorically proven. However, the doctor appeared to be on his way to the gallows from sheer xenophobia. Skelton and his clerk Edgar Hobbs are determined to do their best to save him.

In addition to this major homicide case, Skelton is defending a man accused of knowingly driving a truck full of stolen peacock feathers. He is also defending a young tearaway charged with burglarizing a factory and setting it on fire to cover up his depredations. His novel approaches to both cases are mesmerizing.

On the home front, Skelton has another set of challenges. His wife is determined to buy an airplane and fly it to Australia. His father is newly retired from his job and is at a loss as to what to do with himself. He is sad and depressed, sitting in his chair all day long.

This tale gently parodies the classic mysteries of the Golden Age while delivering a cracking good puzzle. The witty writing and deliciously eccentric characters are icing on the cake. The thread about a guinea pig named Primrose Moorfield is worth the price of the book all by itself.

Like the Bryant and May books, this mystery captures the flavor of the time beautifully. Again like Bryant and May, there are periodic data dumps of incredibly esoteric information. I now know more about peacock feathers than I ever thought possible. The tongue-in-cheek narrative has a spot-on sense of comedic timing, no doubt gathered from Stafford’s theatre experience.

This book is utterly delightful and I cannot recommend it highly enough.