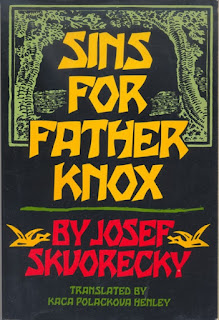 Another review by Barry Ergang found in the massively magnificent archive here at Casa Tipple and Home Eatery Library….

Father Ronald A. Knox, aside from being a clergyman, was one of the early exponents of what has become the “Golden Age” mystery story: the formal, fairly-clued whodunit and—in some cases— howdunit. Among hardcore history-of-mystery buffs, Knox is probably best remembered for his Ten Commandments for writing a detective story. In 1973, Czechoslovakian author Josef Skvorecky wrote the novel Sins for Father Knox, a chapter of which (“chapter” here loosely defined because each is actually an individual short story with an occasional reference to one of its predecessors) violates one of Knox’s commandments. Chapter descriptions—no spoilers!—follow.

Lieutenant Boruvka has his doubts about the guilt of Eve Adam, who has been convicted of and imprisoned for the murder of film director Rudolf Weyr. Despite being married and a parent, Boruvka can’t help finding Eve attractive as he interviews her at the Czechoslovakian women’s prison, listening to her story and remembering vital testimonies from her trial. Apart from finally being able to solve the case and exonerate Eve, he finds that investigation, like film-making, can be “An Intimate Business.”

Performing as a lounge singer at the Moulin Rouge in Sweden and sharing an apartment with a stripper named Zuzka, Eve while breakfasting one morning is approached by a large American who calls himself MacMac. He presumes to know who she is because each has a book with the word Thursday in the title. He assures her that her problem will be taken care of that day, and not to worry. Unnerved but fascinated, Eve doesn’t correct his “Mistake in Hitsungsee,” but instead plays along, thus getting herself caught up in a locked-room murder.

In “The Man Eve Didn’t Know from Adam,” Eve is in Rimini, Italy, performing, visiting, and picnicking with Czech girlfriend Lubomira, now known as Laura. The two observe, from a considerable distance, a young woman hitchhiker enter a raspberry-red sports car, and later discover that she’s been murdered. The police, led by the arrogant Hercule Potarot (yes, I spelled his surname correctly), have stopped five raspberry-red sports cars of different makes. Eve must help him determine, putting it charitably, which driver is the “sex-murderer” responsible.

At the bar in the Majestic Hotel in Sweden, where she’s performing, Eve meets and shares a drink and a cigarette with the inebriated Mr. Jensen. He tells her “Order anything you want, as much as you want. I’m picking up the tab. Because tonight, I’m going to be murdered.” In a story complicated by time elements and multiple characters’ activities, Jensen is indeed murdered. Investigating is Detective Niels C. Kölln, whom Eve met in Hitsungsee, and who is now married to Zuzka. Amid some of the Köllns’ amusing domestic conflicts, Eve delves into “A Question of Alibis” to solve the case.

Now performing at The Pink Jungle in New York City, Eve makes time with—and correctly identifies—McGrogan as a private detective. While they schmooze, the pair also observes the attractive—and married—Connie Starrett being attentive to a number of prospective lovers. When Connie and a man named Leary are murdered, as well as three private detectives—all Irish, McGrogan among them—Eve and a cop named O’Raglan spend a lot of time  trying to geometrically puzzle out the answer to “Why So Many Shamuses?” I personally tried to puzzle out why it’s such an overlong and tedious story.

In “Miscarriage of Justice,” Eve is visiting American relatives in a small town in upstate New York. They’re gathered at the airport to see Bob Cornhill off to Buffalo when, from the waiting room window, they see that a house in town is on fire. Cornhill’s daughter thinks it’s their house, and shortly thereafter, an announcer over the public address system confirms it, advising Cornhill to return home. When he does, police Sergeant O’Mackey tells him the fire wasn’t set, that someone planted a bomb, and that he suspects Ben Turpin, who has done work for Cornhill in the past, because Turpin is African-American and Cornhill once testified against an underground—and vengeful—black organization. What ensues eventually pits O’Mackey against Eve.

Now singing at a San Francisco bar called The Sailor’s Dream, and after chatting with him there but not learning his name, Eve is invited to the Berkeley home of Marcus Twisten, one of several of “The Mathematicians of Grizzly Drive.” As a result of their burgeoning relationship, she becomes involved in trying to solve the kidnapping of his niece in a 39-page story that was about 30 pages too long for yours truly. I was a disaster at math in school, have managed to reach the age of 71 without ever needing algebra, and was thus bored out of my socks as I skimmed 10 wearisome pages of what allegedly (you couldn’t prove it by me and I don’t care) explains the solution to the mystery.

Eve is a passenger in tourist-class aboard a transatlantic liner bound from New York to Europe in “An Atlantic Romance.” Here she makes the acquaintance of several fellow passengers, some of whose recollections and personal histories go back to World War II, and one who has a dubious history when it comes to the amorous intentions he displays toward her. When one of the passengers is murdered, Eve has to grapple with matters of right, wrong, and a kind of nosiness, as well as the solution.

“Just Between Us Girls” has Eve’s girlfriend Zuzka recounting to two young men, Georgie and Brucie, an incident involving what amounts to a girls’ night out and the resultant murder of one of them. Why she was slain and by whom was—for this reader—another tedious tale that necessitated skimming just to reach its end even though it was mercifully briefer than some of its predecessors. Overloaded with characters that are only names on the page—as are many in other chapters—I didn’t care who the murderer was.

“The Third Tip of the Triangle” concludes where everything began: in Prague, and with the usually saturnine Lieutenant Boruvka feeling even gloomier upon learning his teenage daughter is pregnant. Complicating his professional life is a phone call summoning him to the scene of the death of electrical engineer Ludvik Arnold. His investigation includes a number of suspects, one of whom is his daughter’s age who happens to be the offspring of a friend. He is also reunited him with Eve Adam, who helps solve this, another case I couldn’t wait to reach the end of.

Although I’ve known of it, and have seen his Ten Commandments previously, I’ve never read any of Father Knox’s fiction. In each chapter of Sins for Father Knox, and in homage to the mysteries posed in the early Ellery Queen novels, there is a challenge to the reader about solving the crime and identifying the commandment violated. I think its concept is clever, some of the violations neatly subtle, but the overall execution too often tedious and thus disappointing.

Derringer Award-winner Barry Ergang’s mystery novelette, “The Play of Light and Shadow,” is available at Amazon and Smashwords, along with some of his other work.