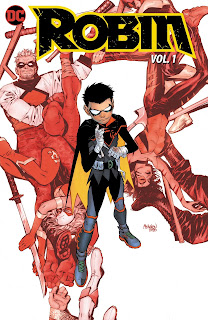 Robin Vol.1: The Lazarus Tournament by Joshua Willamson collects the first six issues of Damian Wayne’s solo adventures into one volume. The son of Batman has run away from home and he is in mourning after the death of Alfred and wandering the globe without purpose. That is, until he discovers a martial arts tournament on an island hosting the world’s greatest fighters. He quickly learns that there is more going on than he suspected on arrival.

This action-packed mystery features great art and several legendary fighters. There are cameos by various members of the Bat family, but for the most part, this is a solo story featuring Damian trying to reconcile with his life. Robin Vol.1: The Lazarus Tournament by Joshua Willamson is a violent tale with plenty of fights as one would expect in a martial arts tournament.  I highly recommend this series for fans of Robin or just DC comic readers looking for a mostly self-contained story.

This series is continued in Robin Vol. 2: I Am Robin which is currently scheduled to be released in September.

My reading copy came from the Dallas Public Library System via the Hoopla App.