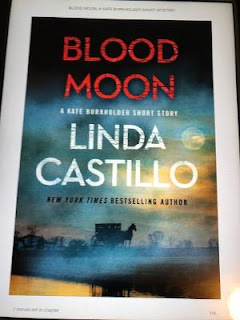 Blood Moon: A Kate Burkholder Short Mystery by Linda Castillo begins as more than one tale in the long running series has--- a buggy crash. In this case, Merle Beachy is on his way home from The Strawberry Festival and things are going wrong. He was already running late and had missed the evening meal. The thick fog certainly isn’t helping as the damp and cold settle in on man, beast, and every surface, including the roadway.

Things go way worse when a loud noise in the woods just after a bridge crossing causes his horse to spook and run flat out. The terrified horse plunges off the roadway, through a ditch, and towards the trees where it soon becomes clear that the buggy is not going to slide in between the trees. Merle is thrown clear of the damaged buggy only to be, within a couple of minutes, attacked by the creature that spooked the horse.

After fighting off the creature, which he thinks might be a bear, the injured man makes his way to a nearby farm. As it happens, that farm is Levi Miller’s place. Levi Miller and Kate Burkholder have known each other since they were kids, so when she learns his call is why dispatch is calling her, she knows that his request for her presence is legit and needed. Before long, Chief Burkholder and her partner, John Tomasetti, are in her unit and headed towards Miller’s farm.

Good thing too as there will be more incidents this foggy dark night. Something is in the woods and things are definitely rapidly escalating. What it is and how to deal with it are two of several questions in Blood Moon: A Kate Burkholder Short Mystery.

An interesting tale that is a bit of a change of pace from what goes on normally in this series. While billed as a “short mystery” this read is a novella and is action orientated with virtually no character development and very little backstory. It is just a fun short visit with some characters long known to readers and new folks.

Also included in the eBook is the opening chapters of the next novel in this long running series, The Hidden One.

I picked this up, pre-publication, using funds in my Amazon Associate account.

This one is a bit different than the normal stuff. I think you could read it without missing out.