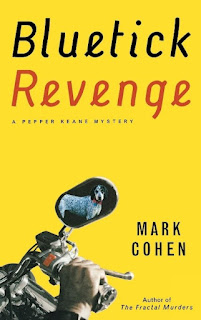 Mark Cohen practices real estate law in Colorado. He also founded The Plain English Institute, a nonprofit that advocates the use of plain English in legal and other technical documents. In addition to years of private practice, he’s served as an Air Force Judge Advocate, municipal judge, and Special Assistant U. S. Attorney. Along the way he wrote two books of crime fiction, both about former lawyer turned private investigator Pepper Keane. Keane oddly enough also served as a JAG and also lives in Colorado. He loves dogs and readily accepts the assignment that kicks off the second title Bluetick Revenge (Mysterious Press, 2005).

Karlynn Slade has escaped from her violent drug-dealing biker boyfriend and turned State’s evidence. She refuses to testify without her dog, a champion bluetick hound named Prince. So her lawyer, Keane’s former partner, hires Keane to liberate Prince. Keane is dismayed to find this excellent dog chained outside with a frozen water dish and lost no time in moving him to a safer location.

Keane’s next assignment is to monitor Karlynn until the FBI can relocate her into the Witness Protection Program. Karlynn eludes him after a few days, and Keane’s search for her takes him into the Pacific Northwest. He encounters well-armed militant skinheads while there and picks up evidence linking to a long-ago unsolved murder. In the meantime the biker boyfriend has issued a bounty on the man who kidnapped his dog. Between dodging the thugs looking to make fast money and the skinheads who resent his intrusion into their wilderness enclave, Keane is a busy guy.

This thriller leans toward a caper with its wry humor and low-key mayhem in its beginning chapters. The droll narrative and devotion to dogs remind me of the Andy Carpenter mysteries. The story becomes quite serious toward the end as all of the plot threads come together in a satisfying ending.

Keane and his friend Scott make a great team; think Spenser and Hawke or Elvis Cole and Joe Pike. Probably leading the charge to create more understandable legal documents is a better use of Cohen’s considerable writing talent but I am sorry there are only two books about Pepper Keane.