Review: The Ride Along: A Charlie-316 Novel by Frank Zafiro and Colin Conway 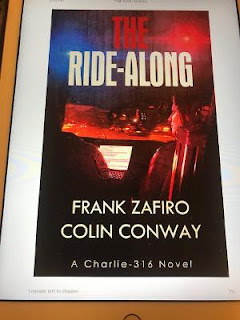 The Ride Along: A Charlie-316 Novel picks up two years after the turmoil of the last book, Code Four. For Officer Lee Salter, his graveyard shift of duty is going to be more stressful than normal as he will have a civilian passenger observing his every action. It is not a duty he wants, but Sergeant Jamie Gelabert of the Spokane Police Department needs him to do it.

This person who will ride with him this night is not an ordinary citizen either. She is a member of the Police Reform Initiative. What had started as a small group has blossomed into a real force pushing for massive change in the Spokane Police Department. The group has powerful support. Tonight, board member Melody Weaver is riding with him thanks to ongoing politics involving the mayor, city council, and chief of police. Officer Salter really has no choice. He has to play the hand he has been dealt as best as possible.

It is early October and cold outside. It is also going to get very chilly in the patrol car as officer Lee Salter and Melody Weaver respond to calls and patrol. They each come with the biases and baggage of their jobs and their roles in society. The night is an exercise in trying to find common ground in the vast ocean of quicksand that is policing today.

The Ride Along: A Charlie-316 Novel by Frank Zafiro and Colin Conway is not an easy book to read or review. The authors setup the chapters as alternating points of view of the same situation or scene as the two work the night shift. A night shift where what is going on crime wise takes a far secondary role to discussions regarding policing, civil rights, the BLM movement, and other societal topics. That is until a domestic violence call changes everything for everyone involved forever.

In short, this is a message novel. A book that poses various questions through the dialogue discussions in the read and leaves it to the reader to answer those questions as there are no easy answers. Real life is messy and that is the same situation in the book. As such, there is a bit of a ripped from the headlines feel to it as various real-world events are discussed in this fiction situation.  Many of the same questions raised in the read are part of our daily lives here in the real world, whether we fully realize that or not.

Whether the book succeeds in its goal of raising questions and making the reader think is also on the reader. Some will get it. Some will not. Regardless of that, it should be clear to anyone who reads the book, that this read is in no way, shape, or form, cop propaganda aka copaganda.

My read was a digital ARC provided by the author quite some time ago with no expectation of a review.