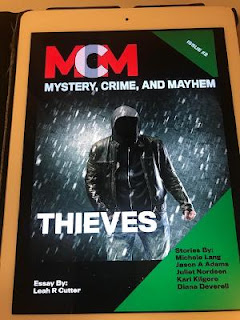 After a short introduction by Publisher Lea R. Cutter where she expresses her love of stories of theft, the tales begin with “The Rehab Archipelago” by Michele Lang. The job went horribly wrong for Goldman. His stroke really messed up the plan. He survived, but there are several serious issues so he is now in a rehab facility. If that was not bad enough, he does not have the money, can’t get to it, and Vladimir will be coming.

“Bubba’s Blunder” by David H. Hendrickson is next and is a prequel to the 2013 novel, Bubba Goes for Broke. Bubba Winslow and Ralphie are on assignment for the boss. Bubba is not the smartest person around as Ralphie keeps pointing out to him. All they have to do is find the right kind of car and swipe it. Then, once they find the car, all Bubba has to do is get the stolen wheels to the chop shop. What could go wrong?

While a car was the item to be stolen in the last job, the theft is far less tangible in “The Fabulous Feats of Billy” by Kari Kilgore. Fabulous Feats, LLC, will either take off or be a total disaster in so many ways for all involved. It is up to Billy Jones which way it goes. He has a plan.

While some describe how food is placed and presented to the diner is a form of art, in “Sushi à Volonté” by Melissa Yi, a certain type of food is made into wearable art. The Montreal artist, Miyuki Ando, takes sushi and creates necklaces, earrings, and more. She has a thriving business. She isn’t about to let a thief ruin her business.

Washington State Patrol Trooper Captain Kent Harper has a case. It isn’t exactly what he should be doing as boss of the Spokane Special investigations unit, but rank does have privileges. In “Gone Gold” by Dianna Deverell, Harper uses his rank and his long dormant investigative skills to work a theft that is very important to the victim. 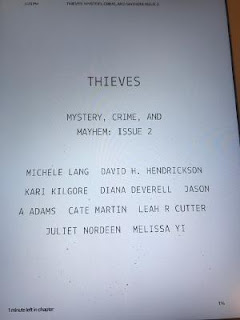 It took a long time to get it, but the Stop N’ Shop convenience store is all his and Stuart Michaelson intends to keep it that way in “Bobby and Pete” by Jason A. Adams. He thinks his world is pretty set. The theft of a can of cat food leads to a lot more.

Thanks to Leti, he was able to lift the cellphone from La Madrina without her knowing. Hopefully, it will have the proof they need in “The Fall of La Madrina” by Cate Martin. If it does not and she figures out what they have done, the consequences for them as well as many others will be dire.

It had taken awhile, but Jacob has a good job again with insurance benefits in “Tiny Dreams” by Leah R. Cutter. He finally has put his past behind him and is on the straight and narrow. An overnight theft at the warehouse could jeopardize everything and he is not going to let that happen.

“Libby’s Millions” by Juliet Norden is next and is the last read in the issue. As the title “Libby’s Millions” by Juliet Nordeen indicates, the tale features Libby Ortiz and her millions. She has over seven million reasons to keep going day after day. Unfortunately for her, the money is not in her direct possession and she is unable to get to it either. The thought of getting to where it is stashed is the motivation that keeps her going now. The fact that a glitch could make her lose it all is terrifying.

Thieves and thefts of all types drive the tales in Thieves: Mystery, Crime, and Mayhem: Issue 2. Much like the first issue, Private Eyes: Mystery, Crime, and Mayhem: Issue 1, the issue is entertaining and runs the crime fiction gamut of a little violence to a lot. Complicated tales along with complicated characters and situations make for another fun issue and a read well worth your time.

Material picked up back in late May by way of funds in my Amazon Associate account in order to read and review.