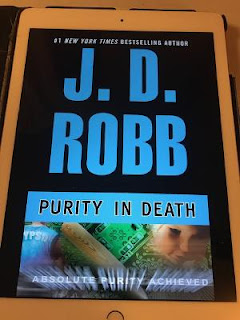 Imagine, if you will, a computer program that can be transmitted like a virus to a certain person. A virus that could not be seen by the person using the computer. A virus that could, after a few hours, so infect the person that death is most likely inevitable. A virus aimed at the worst of society that always seem to escape justice. The folks that many would like to see removed permanently in order to make things better for all. Is the ability to do that, justice or vigilantism? When others who are not the target also die, are those deaths unavoidable collateral damage or just the cost of finally achieving justice and getting rid of some very sick folks?

That is the plot behind Purity in Death: Eve Dallas Mysteries by J.D. Robb. It is July 2059 and the summer is brutally hot. The soul crushing heat is driving some folks mad which is why all types of violence are up. But, the actions of one Louie K. Cogburn far exceeded what is common thanks to the heat. The small-time drug dealer was known for being calm and organized as he sold drugs to the young kids that attended schools near his Lower East Side apartment. Folks knew what he did, but proving it in a court of law has repeatedly proven very difficult over the years.

He wasn’t known for violence, but the carnage he left behind in the apartment and hallway outside of it shows that he could do it. A brutal and violent scene, that Officer Troy Trueheart, a young and good cop that NYSPD Lieutenant Eve Dallas knows and had worked with before, put an end to with his stun weapon. The use of the stun weapon resulted in the death of Louis K. Cogburn.

He never should have died. The fact that he did means Officer Trueheart, who was off duty and heard the screams coming from the apartment and this came to help, is now in a world of trouble. The fact that he fought the crazed man before drawing his weapon is a point in his favor. The fact that he was so shook he called Dallas first before reporting the situation to dispatch, is a definite negative, and Internal Affairs will not like that one bit.

Then there is the fact that another resident, Ralph Wooster, is dead and another has been injured. Suzanne Cohen was the one screaming and got Officer Trueheart heard and came to help.

Beyond the issue that this whole deal is way out of character for the very much dead Cogburn, there is a strange message on his computer. “Absolute Purity Achieved” in capital letters is sitting in the middle of the screen. That phrase means nothing at this point to Dallas, but it soon will as the case explodes into yet more violence.  The next round is at Cop Central and puts the lives of several officers and friends in jeopardy along with her own.

Purity in Death: Eve Dallas Mysteries follows the now familiar format of the last several books where there are multiple interlinked cases, politics and the media are heavily involved, Roarke is a bedroom stud when he isn’t helping her case along, and the usual head hopping in point of view. A couple of added twists for various characters are thrown in for fun, here and to create new complications/storylines for later books.

Purity in Death: Eve Dallas Mysteries by J. D. Robb is another fun read that is part police procedural and part romance. It is pure escapism and with the way the world is these days, we could all use more of that.

My reading copy came from the Dallas Public Library System through the Overdrive/Libby app.