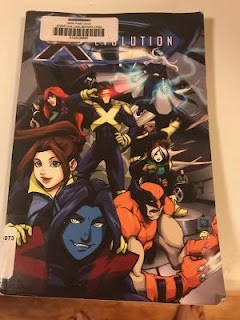 X-Men: Evolution, Volume 1 by Devin Grayson collects the nine-issue series into one volume and tell stories set in the same universe as the animated series. This book is about X-Men living in a boarding school run by Professor X while attending regular classes with other students at Bayville High school. At the boarding school they train to learn to control their mutant gifts as well as keeping the secret of mutants from the general population.  As usual, Magneto is around trying to start a war with humanity while recruiting mutants to his side.

This series and this book has a wide-ranging cast which includes Wolverine, Storm, Beast, Cyclops, Rogue, Jean Grey, and more. This book highlights a character each issue and tells a story that focuses on that character. Most of the stories directly relate to the animated television show. For example, one story is about Professor X recruiting Storm and Wolverine to be teachers at his school.  Another story is about Cyclops being recruited to be Professor X’s first student. The second half of the collection takes place after the first season and before the second season of the television show. 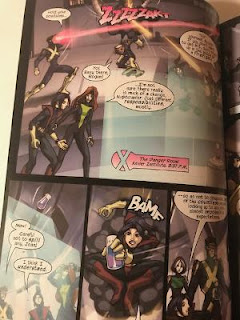 For the most part, the art is pretty good. The last issue in this collected volume is a radical change that features a totally different and far inferior art style.  There is plenty of action, heart, and a bit of humor. I think if you are familiar with the X-Men animated TV show, X-Men: Evolution, Volume 1 by Devin Grayson would be better for you, but even if you are unfamiliar, you could still read it and enjoy it.

My reading copy came from my Dad’s childhood stomping grounds, the Audelia Road Branch, of the Dallas Public Library System.