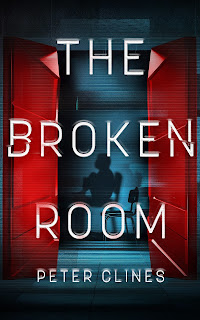 In The Broken Room by Peter Clines, a retired government agent named Hector spends all his time in a seedy bar basically drinking what is left of his life away. That is until a little girl comes in to the bar to specifically see him. She claims that a ghost named Tim is trying to help her and that he is calling in his marker. Tim and Hector were good friends when Tim was alive. It is also true that Hector owed Tim from long ago and a debt is a debt regardless of the fact that Tim is dead.

The little girl is named Natalie and is on the run. She escaped from the Project and the evil experiments they were doing to children. She has been through some horrible things and has no family to help her. The folks running the Project want her back and there are killers on her trail looking to get her back, one way or another. She needs help and Hector has to put down the booze and start doing everything he can to keep her alive and safe.

This is an action-packed novel that may not be for everyone since Hector spends a lot of time explaining why he is doing things the way he does every time Natalie asks. Natalie asks a lot of questions. Each time she does, the action gets slowed down for the explanation that often runs a couple of paragraphs and more. Additionally, there are many scenes of child abuse and some are very graphic, a lot of racism, body horror with scenes of graphic mutilation of victims, several scenes of throwing up which are very detailed, a rape, several suicide attempts, and many scenes of detailed and graphic violence. A big theme of the novel is the border, immigration policy, and the dehumanization of illegal immigrants.

This is a very adult book that should not be read by kids. This is not a light read. This is a dark and very brutal read. Overall, I enjoyed the book despite the aforementioned issues and the fact that there are several clichés in the book.

At this point, The Broken Room by Peter Clines is a standalone novel. While it did tie up most of the plot threads, it was clear to this reader that there was a definite obvious path for a sequel.

My reading copy came from the Vickery Park Branch of the Dallas Public Library System.