Guest Post: Excerpt from Architect of Courage by Victoria Weisfeld 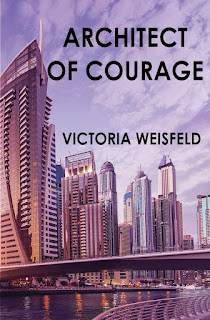 Please welcome author Victoria Weisfeld to the blog today with an excerpt from her new book, Architect of Courage.

Architect of Courage by Victoria Weisfeld

This excerpt is from the end of Chapter One. Earlier, prominent Manhattan architect Archer Landis leaves a testimonial dinner to visit the woman he loves. When he arrives at her apartment, the lights are off, and he finds her dead, shot in the chest, her blood staining the white lace ruffle of her shirt. Panicking and afraid of being caught in a compromising situation, he leaves before calling the police. No one must know he’d been there. He takes a cab back uptown to the dinner and a ballroom full of his colleagues.

The dinner was under way when he arrived, and he had to find his seat, leaving no time to place the call right then. He’d missed the salad.

“What’s wrong, Arch? Where’ve you been?” a colleague asked. “You look awful.”

Landis adjusted the knot of his tie. “Touch of a bug. Killed my appetite.” He cringed at how easily the lie came. It was what he’d planned to say if anyone asked why he didn’t appear at dinner. At least now they wouldn’t question it if he jumped up later and went out for a few minutes. He’d call the police from a hotel phone, not his cell. Much better. He’d do it between the main course and dessert.

The men at the table commiserated. “It’s going around,” one said. “Three of my people are out.”

As his tablemates ate and shared shoptalk, Landis frowned at his plate. Who would kill Julia? What possible reason could there be? Nothing in her world explained it. Her working life was his office, and her social life was him. He was confident of that, of her. Was it a random, senseless, act? Or did some secret peril lurk close by? If so, it could be as close as his own skin.

When the servers came to clear, the food on his plate was rearranged but uneaten. The evening’s introductions and accolades began. The words of the welcoming speeches jumbled meaninglessly. He rested his head on his hand and mapped out what he’d say to the police. Dial 911, give the address, disconnect. Don’t answer questions. Don’t give them time to ask anything. How long does it take to trace a call? He’d stay on the phone for seconds. Only the facts, no context. Hang up.

Here came dessert. He’d lost another chance to make his call. The server set a collapsing strawberry pavlova in front of him. Frothy white meringue shell, a lake of red juice. Landis’s stomach turned over. He pushed the dish away and took a great gulp from his water glass.

Now he was stuck. It would be too awkward to step out during the commendations, especially since Landis’s long-time friend and fellow Yale alumnus, Phil Prinz, was receiving the main prize—the 2011 Calder Award for Integrity in Architectural Practice. Called to the lectern, Phil’s first words were to ask the award’s previous recipients to stand. Landis wobbled to his feet, waved—my God, did I just smile? His other hand gripped the rim of the table so tightly he could hardly pry his fingers loose.

Prinz’s high-minded theme was courage: physical, mental, emotional, and moral. He might have been speaking directly to Landis, chiding him. 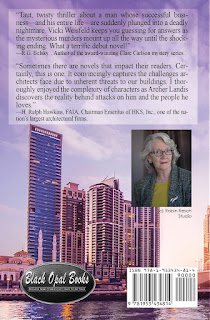 Physical courage, Prinz said, is the kind people think of most often, the kind that lets us ski black diamond runs, compete in marathons, and drive the Jersey Turnpike. A misstep can end with a trip to the emergency department, but any physical damage is visible, treatable, and often heals completely.

Not when a hole has been blown through your chest. Landis fingered the stem of his water glass.

“Emotional courage is when you put your inner self, your core being, in harm’s way, when you risk sustaining wounds people may never see and that may never heal, when you face truths you’d rather ignore. It’s when you risk the very essence of yourself.”

Of course Landis had initial reservations about an affair with one of his employees; of course he’d worried his wife Marjorie might discover it. But he’d left those concerns behind. Instead, he’d followed the single shiny track that appeared in front of him: he fell in love. Unexpected, unlikely, unwise. Julia had opened his heart, revealed to him his true self.

Finally, Prinz said, there’s moral courage—when you stick your neck out for some cause not your own simply because it’s the right thing to do.

The white noise inside Landis’s head drowned out the rest. Although the speech wasn’t especially profound, it earned a standing ovation that precipitated a rush for the doors. Clamoring colleagues swarmed the lobby. A discreet telephone call was impossible.

Moment after moment, he put off calling the police until not calling became inevitable. He simply could not speak the words that would make Julia’s death real, that would pierce his chest like arrows. His life had a hole in the middle of it, and he felt its razor edges. Unless he grabbed onto something, he would fall through. What he clutched tight was his shameful secret.

(This is a low point in Landis’s life, but his situation becomes much worse, and before the book ends, he must have all four types of courage his friend described. To overcome tragedy—and to survive—Landis must confront prejudice, self-doubt, the limits of loyalty, and a need for redemption that transcends revenge.) 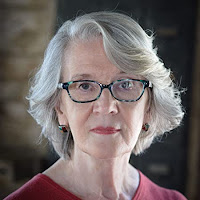 Award-winning short story writer Vicki Weisfeld is a Midwesterner (Go Blue!) transplanted to New Jersey. Many of her mysteries are set in those places. Her mother’s Texas family inspired stories about Brianna Yamato, rookie reporter and expert investigator for the Sweetwater (Texas) Register. Vicki’s first thriller, Architect of Courage, out June 2022, is set in the summer of 2011. Everything goes from bad to worse to worst for Manhattan architect Archer Landis, who must find the courage first to survive, and then for redemption. Visit her blog at www.vweisfeld.com.