Friday means Friday’s Forgotten Books hosted by Patti Abbott here. Unlike my son, Karl, who is majorly into the whole Halloween thing and just loves it, I don’t care for any of the Halloween thing. In thinking about what to do for this week and the season I thought of FLANK HAWK: A First Civilization’s Legacy Novel by Terry W. Ervin II. Not only is it one heck of a good read it features, among other things, souled zombies. That seems to meet the criteria for the season….. 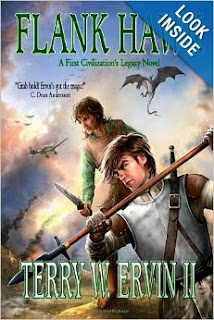 For Krish and his cousin, Guzzy, the recent battles outside of their small village have been more then the annual minor attacks designed to disrupt the yearly harvest. The young men fight to defend their village, Pine Ridge, and to protect all they hold dear. With swords and spears protected by magic and salt, they fight on as the enemy in many different forms continues to press the attack and people they know die around them. Back up is on the way as kingdoms make alliances in order to slow the advance of those loyal to the evil necromancer king. One such alliance allows Prince Reveron of Kreese to eventually take over and lead the small group Krish is part of into battle. Krish becomes noticed not only by the Prince but by others and gradually works his way deeper and deeper into the circle of those that Prince Reveron trusts. While Krish may not have had formal military training, he acquires battle skills at a rapid rate and has certain other skills that he continues to try to keep hidden from those around him.


The book is highly recommended as FLANK HAWK: A First Civilization’s Legacy Novel is a mighty good read.