The 21st book in this long running series finds J. P. Beaumont surrendering to the inevitable. It is 2010 and after years of increasing pain in both knees he is on medical leave in order to have double knee replacement surgery at the Swedish Orthopedic Institute in the Seattle area. He’s plenty scared as is his wife and fellow officer of the Special Homicide Investigation Team, Mel Soames. It is one thing to be injured suddenly in the line of duty and therefore given little time to prepare for the medical event. With a planned surgery like this, both J. P. and Mel have had plenty of time to think about the procedure and what could go wrong.

J. P. is soon reminded of the power of painkillers and the threat they pose to his hard won sobriety. Those same painkillers powerfully awaken deep memories long repressed in his mind. As initial recovery and physical therapy begins post-surgery, J. P. is deeply haunted by the memories of things unresolved. 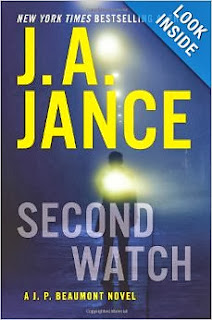 Not surprising one intense dream/vision is of what became his first case in Homicide with the Seattle PD. A naked woman found dead in grease barrel by two boys back in 1973. It was eventually determined she was Monica Wellington.  J. P. Beaumont was in a radio car back then with Rory MacPherson and they were the first two officers to arrive on scene. They helped out with the initial investigation on the first day. After J.P. came back to work after his off days he discovered that both he and Mac had been promoted to the jobs they had long coveted. Mac was now in motorcycle patrol and J.P was now a detective. That meant he would be learning the ropes from more experienced detectives while assisting on the Monica Wellington case. A case that never really went anywhere and was eventually closed without J.P. ever knowing it.

The second intense dream/vision that haunts J. P. post-surgery is of second Lieutenant Lennie Davis appearing in his hospital room. J.P. knows that sight can’t be real because Lennie D. led J.P.’s unit back in Vietnam. Thanks to Lennie D. way back when J. P. eventually made it home.  Lennie didn’t. J. P. realizes there is unfinished business in a story line that is based on real people and events powerfully detailed in the closing chapter “The Story Behind Second Watch.”

As J. P. works to regain the use of his legs, he also works to resolve the homicide case as well as the personal matter. The story lines gradually weave together resulting in a powerful novel that looks back as well in time as considers the future. Time is said to heal all wounds, but sometimes it needs a little help from good people pulling together to do good things. A prequel in a sense for, at least part of the book readers are in the memories of J.P., this novel is also about the cost of war and the pain of those who remain at home. Deeply moving, J. A. Jance has an incredible read that is far more than a mystery. It tells a tale that honors the dead and their survivors, not just in military service, in a way that few authors can achieve.

Second Watch: A J. P. Beaumont Novel is another very good book in this long running series. While it could be read as a stand alone, it would be best to read these books in order.

Material supplied by the good folks of the Plano Texas Library System.

Thanks for this, Kevin. I am looking forward to reading 'Second Watch' as J A Jance has long been a favorite of mine. I attended one of her book tour presentations a week ago. A large audience was made to laugh and also brought to tears as she told her personal story of the inspiration for this book. If fans cannot see her at a tour stop, the story is available on her website.

The story is also the final chapter of the book referenced in the review. Good book. Thanks for reading and commenting.