Sample Sunday: Excerpt from "The Rules" by Mark Troy

Ava takes on the job of protecting Paul, the son of a wealthy and powerful man from a country where murder and kidnapping are means of doing business. Paul convinces her he is not like his father and has no wish to continue in the family business.

Paul is a few years younger than Ava and very attractive to women. How attractive becomes apparent when another woman makes an advance on him. The incident draws attention to Ava and Paul, violating her third rule. The incident also forces Ava to recognize that she, herself, is attracted to him. In order not to violate her first rule, she decides she must violate her second rule and leave him. Paul, however, operates under a different set of rules and won't let her leave. 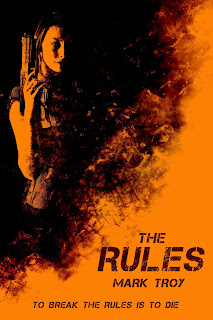 The Rules
by
Mark Troy
Rule Number Three
Paul was not his real name. He could be Paolo or Pablo, or, more likely, something entirely different. A person who wants to assimilate will anglicize his name, but a person who wants to hide will change names completely.
Ava Rome is my real name. I protect people who need to hide.
I met Paul and his father in the house they rented in an exclusive area of Honolulu.
"My father is a wealthy and powerful man in our country, Miss Rome," Paul said. "He has powerful enemies."
They didn't name the country and I'd agreed not to ask. I guessed a South American nation. They spoke either Spanish or Portuguese. Not being a linguist, I wouldn't know which.
Paul spoke good English, lightly accented. Later I learned he had spent most of his life in exclusive private schools, insulated from his father's business.
He sounded better than he looked and he looked incredible. Average height, wavy dark hair, perfect teeth to go with his gorgeous features, and the lithe build of a soccer player. A striker, maybe, a position requiring explosive speed. I figured him about mid-twenties. He wore an open-neck sport shirt and chinos. He rocked the chinos.
You start thinking like that, you should leave.
But I didn't. I was drawn to the gold cross below his throat, framed by the open collar of his shirt. It was small and delicate such as a woman would wear. I wondered if the cross had belonged to a woman in his life. His mother, perhaps. If so, I liked him for it.
I didn't like anything about his father.
"Who are your enemies?" I asked.
Paul translated the question into his own language for his father who dismissed it curtly.
"My father says that is not for you to know."
"If I'm to protect you, I need to know the threats."
"If there's a threat," Paul said.
"You don't believe you're in danger?"
"My father has become more than a little paranoid," Paul said. "Who wouldn't, given the life he lives?" He shrugged and flashed me a sheepish grin. "Between you and me, the danger is mostly in his imagination."
I scanned the lanai. At the ocean end, two men played cards at an umbrella table. A third man leaned against the bar in the living room. A fourth man maintained a watch near the front door, out of my sight. He'd been about to pat me down when Paul intervened. Four men, one type. Dark slacks, white sport shirts, cheap hair cuts. They were bulked up, but not muscled-up. Their handguns printed under their shirts. They'd do a good job against a normal threat, but wouldn't last long against professionals.
They wouldn't last long against me.
"These aren't imaginary thugs," I said. "Paranoia often has a basis in fact."
"The laws in our country are weak and ineffective. To stay in business, my father has to be strong. Murder, kidnapping, these are the means employed by his competitors. My father does not wish it, but it is what one must do."