Weather is often a major factor in this series and it certainly is in Tamarack County. As the latest in the series from author William Kent Kruger opens it is ten days before Christmas. Snow and cold have descended on the area surround Aurora, Minnesota. But, it wasn’t the snow and cold that killed the elderly Evelyn Carter, wife of a local judge. 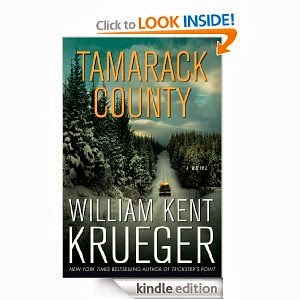 Private Investigator Cork O’Connor won’t know for hours that she is dead and he won’t be the only one cloaked in ignorance of the crime. It will be many days before her body is recovered.  As Cork and others set out in a search party to find the missing Evelyn Carter they have no idea what the future holds in this very complicated case that will lead to the decapitation murder of a family dog and much more.

The latest in the series is another good one featuring Cork’s complicated family and many other interesting characters. As in other books recently of this series, the focus shifts from character to character as they consider the themes of happiness, faith, and acceptance of others while dealing with the an increasing set of problems that hit close to home. The harsh weather conditions of Minnesota in late December is just as much a character as the characters themselves in this complicated mystery read.  For this reader Tamarack County was a much improved read over recent ones in the series and a read that was very good.

Material was supplied by the good folks of the Plano Texas Public Library System and specifically the hard working and much appreciated staff of the Haggard Branch.

Is this a good book to read if one hasn't read earlier books in the series?

Well, I always say read a series in order. But, yes, I think you could get away with starting here.