Late August of 2004 finds Deputy Jordan McManus in the bed of a former girlfriend early one morning while drought grips Dukaine, Indiana. Like the drought that grips the area, McManus is gripped by the past. A past that includes the love of his life, Ginny, who has been married for quite some time and has changed. Whatever they had once, years ago, has been tarnished by time and the fact she has a child and is married to Ed Kirsch. Not known for being mentally stable at the best of times, were he to discover what McManus and Ginny have done the results could be disastrous. 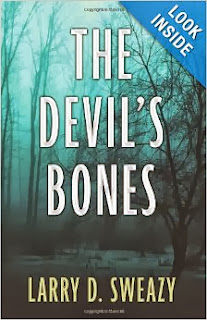 Moving back and forth from 1985 to late August of 2004, author Larry D. Sweazy weaves a complicated tale of pain, loss, racism, regret, and redemption in The Devil’s Bones. The read shifts in point of view throughout the book as the pieces slowly come together in various mysteries. Each secret has had a damaging ripple effect over the years and has caused numerous events --many of which Deputy Jordan McManus has little knowledge of despite being on the edge of many of them. Relying on his brother nicknamed “Spider,” a tenuous decision at the best of times, McManus works to clear his name and end the current carnage. The shooting of Holister and himself is just the start of a wave of violence that will also uncover the past and answer questions that have haunted the small town for years.

Reminiscent in style and tone of his many westerns, The Devil’s Bones is a very complicated mystery that pulls the reader in quickly and never lets go. Rich in details, characters, and setting, nothing is simple in this read where drought finally exposes all the secrets of the past.


ARC provided by the author way back in October 2011 for my use in an objective review.