Sample Sunday: Excerpt from "Bowling With The Big Dogs" by Tim Matson

Back during the summer I was asked to take a look at Tim Matson's Bowling With The Big Dogs and provide some editorial guidance. Not that it really needed much input from me. I enjoyed the book immensely. I simply LOVED this book. It ranks up there in my top five of the year as I think it is an incredible read. I offered to Tim that if he would like to submit something for Sample Sunday I would be glad to run it. He agreed and sent the long sample below which follows the Amazon Synopsis…..

Drinker. Smoker. Detective. Smartass. Psychic?
The often sarcastic Moon Mullen isn't your average overweight detective who drinks to forget the past. Not that Moon Mullen doesn't drink--- he does and is very good at it. But, instead of drinking to forget, Moon Mullen does it to control the voices in his head because he hears thoughts and emotions. Being psychic has advantages in the detective business, but Moon Mullen's gift can be a curse as it is anything but consistent. A warped sense of humor allows him to survive, and a drive to catch a serial killer threatening his small Minnesota town gives Moon a chance to bring justice to the people in his past. 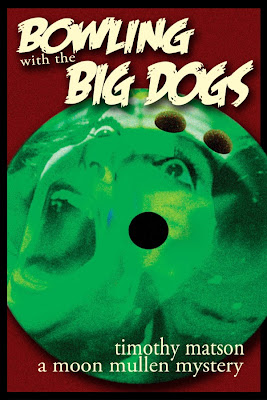 The guy with the shaker was beginning to make my teeth itch.
While I’m sure that his parents had been ecstatic when he showed some interest in music as a child, they probably didn’t envision this in their wildest nightmares. He was holding it in both of his hands, caressing it and shaking it like he had a secret he was just dying to tell. From the looks of him, I think I knew what it was, but wish I didn’t.
The bar had a typically backwoods Minnesotan name: The Deer Head Bar. This was owing to the stuffed Monster Buck head that was mounted on an age-darkened plaque that looked almost petrified. The story that goes along with the taxidermist’s work was equally old, and had magnified to epic proportions. Apparently the old guy that shot the Monster Buck just grazed a slug along the deer’s head, stunning it, and he was so afraid that it was going to get away that he ran across the fifty yards that separated them, jumped on his back, and stabbed him with his hunting knife, somehow finding the massive heart. The scar on the head of the buck was still visible, so I guess it was worth talking about. When I first moved here, I innocently asked, “Why didn’t he just load another slug in his shotgun and blow his brains out?” Obviously I’m not the hunter type, because the sneers and gasps from the crowd nearly blew my head off.
“His gun must have jammed! And besides which, you asshole, he had to save the fucking rack!”
Didn’t make any sense to me, but I don’t get off on blowing woodland creatures away. When I have a craving for meat, I’ll get it from the butcher, where I’m sure it would have said “moo” a few times before it meets its demise. In any case, I found out later that the story of Roger the Monster Buck was somewhat less than true. What really happened was that the hunter was driving back home after a heavy night of drinking, hit the deer with his rusted Ford Escort and somehow managed to rope it on what was left of the car’s roof. He then hid it in his barn for two days until Deer Opener, the holiest of holy days, and brought it out to the accolades of his peers. Not as Tarzan-like as the first tale, but much more believable.
The bar itself was typical in its Midwestern style. Along with Roger the Monster Buck, the place had the usual assortment of neon signs advertising beer and liquor, a long bar with a brass rail on the bottom to rest your feet, and several long-legged stools with stools around them so you could eat your greasy bar food and wash it down with the beverage of your choice in comfort. The bar was shaped like a boxcar, long and thin, with a flyspecked picture window in the front overlooking the main street through town, and bathrooms in the back, each marked, appropriately, Bucks and Does. I knew enough about animals that I didn’t screw that up. I also didn’t ask how the monster buck got the name Roger. Sometimes it’s best to leave well enough alone.
It was well enough into the evening that the Twins were playing on the nicotine-smeared television, Radke on the mound, and the sounds of the game were interrupted by the reverberations of heavy feet clomping over the dirty carpet. A herd of plus-sized women were stampeding in, followed by a short, thin guy holding a shaker.


By the way, the book is FREE through Tuesday at Amazon.
Posted by Kevin R. Tipple at 12:30 AM