Review: "One Angry Julius Katz and Other Stories" by Dave Zeltserman

This very good short story collection leads off with Dave Zeltserman’s signature character Julius Katz.  Even Boston’s most brilliant and eccentric detective Julius Katz has to serve jury duty.  In “One Angry Julius and Eleven Befuddled Jurors” he has had enough with the trial and the state’s case. Any one paying attention should have come to the same conclusion and realized the state is going after the wrong person.  Fortunately,  Katz and his artificial intelligence side kick, Archie, can fix things if---allowed. 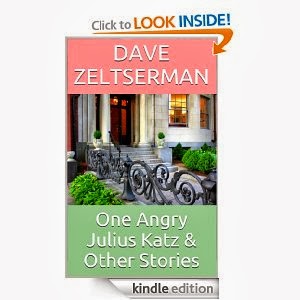 From time to time the thought “Some People Deserve to Die” crosses the mind.  Even a much needed trip to the dentist is secondary to the Cambridge, Massachusetts murder case of Sanjay Patel. The case is complicated, the suspect list is long, and two detectives working the case look at life and death far differently.

All writers need a mentor-- that person who will help the writer improve his or her craft.  For Patrick, the legendary Charlie Valtrone is that mentor.  A mentor that will push Patrick in unexpected ways to improve his craft.

If the little sandwich shop hadn’t been closed when Michael Yarrow arrived things might have been different. It was closed in “When Death Shines Bright” and that changed everything.

“Emma Sue” was always the most beautiful woman in the world and still is despite everything that has happened. The years on the sheep ranch have been hard, but she has a plan in this crime tale set in Oklahoma.

Lawrence Talbot was already running behind when the three men took over the bank. He needs it over quickly in “A Hostage Situation.”  He isn’t the only one who needs it over fast.

The book concludes with the first chapter of the book Monster: A Novel of Frankenstein.

Primarily a noir short story collection, One Angry Julius Katz and Other Stories features interesting characters pushed towards their limits. Like many of the characters in Dave Zeltserman’s fictional world these characters are on the edge physically, financially, and emotionally in these tales of crime and mystery. In many cases the ends do justify the means in a book that showcases the versatility of the author.

Material was picked up during the author’s free book promotion earlier this month.