FFB Review: THE TERRITORY: A Mystery by Tricia Fields

Earlier this week on Tuesday, I reviewed MIDNIGHT CROSSING. While that is the fifth book in the series, it all began with THE TERRITORY. I reviewed this book way back in March of 2012. Make sure you check out the full FFB list over at Todd Mason's Sweet Freedom Blog. 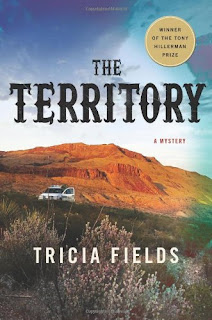 “Mexico blamed the American lust for drugs and lack of gun laws, and the U.S. blamed Mexico’s corrupt government and loss of control on the drug cartels. The blame was somewhere in the middle, so in a strange way, it made sense that the problems had collected and festered like an open wound in the hundred-mile strip of middle ground the locals called the Territory.” (Page 75)

Deep in southwest Texas where the closest town on the United States side is the distant Marfa is the small town of Artemis, Texas. For the 2500 residents their small town is a refuge against an increasingly violent and hostile world. The people who live in this place treasure their isolation from the world. Their remoteness, amidst the harsh desert beauty of southwest Texas, makes them vulnerable to the escalating drug war violence spilling out of Mexico.

Something Police Chief Josie Gray knew long before that fateful summer evening when she watched violence explode across the river in the small Mexican city of Piedra Labrada.  A war is raging between the “Medrano” and “La Bestia” drug cartels as the Medrano faction tries to hold onto their crumbling position. Eventually the gun battles seem to end this night and Josie Gray thinks the violence is over for now.

Unfortunately for her and her town it isn’t over by a long shot. Out of sight from Chief Gray’s watchtower perch, Medrano’s ranch was been attacked. Medrano is in route to hospital in Artemis via ambulance for emergency medical care as he holds dual US and Mexico citizenship.  Despite being outnumbered and out gunned, somehow Chief Gray and her small force, are supposed to keep him and the medical team alive despite a near certain assault by gunman from La Bestia who are determined to finish the job.

The resulting attack on the hospital brings violence to the US side of the border in ways not seen before. That night propels the major storyline of the book forward as various events and complications begin to happen thanks to the ripple effects of the attack. The cartel had no idea what they were creating in this complex story of murder, weapons, and the future of those who live in Southwest Texas.

Despite the occasional travelogue feel to the book (such as the statement about how monsoon season is June 15 to September 30 each year- though us native Texans know that is only the official parameters and laughably inaccurate) this is well written and engrossing book. Police Chief Gray and her small force are detailed complex characters and interesting as are many of the local residents. The setting plays a major role in the story from the first page to the end as expected with an author who captured the “2010 Tony Hillerman Award for Best First Mystery” with this novel. Filled with two strong storylines, interesting characters, and a hint of romance for Chief Gray, and plenty of violence, this book is a powerfully good read.

Simply put- this is one not to miss.