Alive! A Valentino Mystery (Forge Books, 2013) is Loren D. Estleman’s third full-length book about UCLA film archivist Valentino, I’m not sure his first name is ever mentioned. A collection of short stories is available in ebook. Valentino spends his days tracking down rare film footage and artifacts from the golden days of Hollywood on behalf of the university while fending off collectors with deeper pockets. 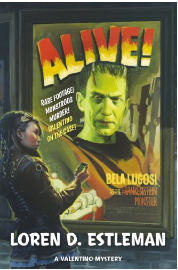 A friend from the past calls, claiming to have found the long-lost Bela Lugosi screen test for the part of the Frankenstein monster in the 1931 movie, a part that went to Boris Karloff and made him famous. Valentino doesn’t believe him and doesn’t follow up. Within 24 hours the friend is dead and the police are questioning Valentino. The police think they’ve found the killer but Valentino knows they haven’t and delves into the case for the sake of self-preservation. Along the way the acting careers of Lugosi and Karloff are described and the not-quite-sane acquisitiveness of collectors is fully illustrated.

Valentino is no stranger to collector obsession; he has purchased a defunct movie theatre with the intent of returning it to its full 1920s glory and is selling some of his own movie memorabilia to pay for the restoration. His efforts to establish the exact shade of blue paint used in the original theatre demonstrate just how far over the edge he has gone.

In this adventure Valentino finds a sidekick in his intern, who educates Valentino on the world of steampunk. The intern and his friends come to Valentino’s rescue at the Hollywood wax museum in a frantic resolution scene. Film lore, steampunk, historic building renovation, all wrapped into a carefully plotted mystery; there’s something for everyone in this entertaining book.


Aubrey Hamilton © 2017
Aubrey Hamilton is a former librarian who works on Federal IT projects by day and reads mysteries at night.
Posted by Kevin R. Tipple at 12:30 AM