Barry is back with a new review today as he reviews Dark Passage by David Goodis. This is not the first book by David Goodis he has reviewed here as he notes in the review below. After you read what Barry has to say make sure you head over to Patti Abbott’s blog for the full list of FFB review suggestions. 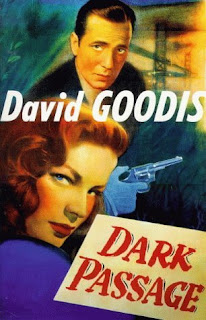 Imprisoned for life for the murder of his wife—a crime he didn’t commit, believing instead that she died accidentally, despite the rhyme and meter at the beginning of this sentence—and that’s not a spoiler because you find it out in the second sentence on the first page—Vincent Parry manages an escape from San Quentin, his ultimate aim being to escape from the United States, having begun “remembering pictures he had seen in travel folders long ago. Places that looked out upon water. Lovely beaches. One was Patavilca, Peru.”

(I’ve no idea what Peruvian folders Parry or his creator may have seen, but when I looked up Patavilca to see if it actually exists, I discovered that it’s an inland rather than coastal town. However, if you look at the Wikipedia site, you’ll see that the town is spelled Pativilca and is shown as being coastal. I’m sure geography buffs and experienced travelers will help clarify this point, despite its ultimate insignificance to the thrust of the storyline.)

Unexpectedly and unwittingly the Blanche DuBois of noir fiction, Vincent Parry becomes dependent “on the kindness of strangers.” The first one, the driver of a Studebaker, seems inordinately curious about his passenger and eventually proves problematic. The second, Irene Janney, has reasons of her own for helping a man she knows to be an escaped convict. The third is an anonymous cab driver whose motives are far more ambiguously altruistic, as are those of the doctor to whom the driver takes him.

Beyond mentioning that when Parry’s best friend, George Felsinger, is murdered and Parry becomes the prime suspect, I don’t want to say anything more about the plot lest I ruin a classic novel for those who have neither read it nor seen the equally classic film from 1947 starring Humphrey Bogart and Lauren Bacall.

I’ve read and enjoyed Goodis’s Black Friday, Shoot the Piano Player, Nightfall, Cassidy’s Girl, and Night Squad over a number of years, and I’ve seen the film version of Dark Passage God knows how many times, having been a hardcore Bogart fan since I was 12 or 13. I was curious about how the movie compared with its source, and can finally report that it is extremely faithful to the novel.

For fans of noir fiction, it’s a definite case of “Read the Book, See the Movie.”

Dark Passage is also one of my favorite movies. I haven't read the book, but it is now on the TBR list,