These are busy times for Jeanne of the Bookblog of the Bristol Library so it has been a couple of weeks since she was last here with one of these guest posts. But, the good news is the fact she is back today with her latest Treadmill Books Review. For those who wish to read in order there are five books in the series that began with The Big Kitty published in May 2012. 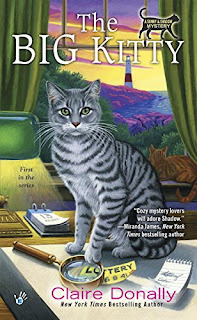 Sunny Coolidge left a job in the big city to return home to Kittery Harbor, Maine to take care of her widower father after he has a heart attack.  Jobs are few and far between, so she ends up working for a local travel agency with a testy boss.  It doesn’t make for job satisfaction, so when an elderly lady named Ada asks Sunny to help her find a lottery ticket that she claims is worth a fortune, Sunny agrees to try to help.  But when she arrives at Ada’s house, she finds the old woman dead at the bottom of the stairs.  Was it an accident—or did someone else believe the tale of the ticket?

So begins The Big Kitty, the first book in the Sunny and Shadow Mysteries by Claire Donally.  Sunny soon picks up her titular sidekick, Shadow, a big stray tomcat who harbors some deep suspicions about humans. Sunny’s dad harbors some of the same misgivings about cats. Throw in a couple of love interests (a cop for Sunny and a neighbor for her dad), the aforementioned irritating boss, and you have the set up for the series.

Most of it is pretty standard cozy. Heroine returns home, check; nasty character who exists to make life miserable for heroine, check; attractive cop/fireman/lawyer with boyfriend potential, check; local atmosphere, check.  What gives the series its spark is that part of the action is narrated from Shadow’s point of view.  Shadow’s perspective is necessarily limited, but he’s a keen observer of action.  Donally avoids many of the cat as character traps and does succeed in making Shadow a strong character even if he doesn’t sniff out the murderer. His descriptions of events are fun to read, if occasionally confusing, and always make me consider how my own cats might view situations.

I find the series to be a bit uneven; certain books work quite well while others are forgettable. Donally does let her characters do a bit of evolving which I appreciate.  Even Sunny’s boss has mellowed a bit.  However, this isn’t a series you have to read in order.

The latest entry, Catch As Cat Can, is one of the better books in the series.  There’s a strong plot, good sense of place with some information about the local fishing industry and some nice twists and turns along the way.  As with all good treadmill books, it held my interest and kept me walking.  Shadow’s thoughts were particularly amusing this time around, even as Donally made sure he kept his “felinity.”

In short, a solid series, if not an outstanding one.