Back in March 2015 I reviewed Bad Country by C. B. McKenzie. I thought it was a very good read. Today on this final Monday of June, Aubrey  Hamilton is here with her review of the book. Make sure you check out her other reviews on these pages. 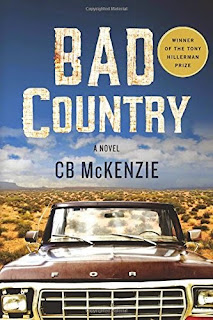 Bad Country by C. B. McKenzie (Minotaur, 2014) is the story of a former rodeo cowboy who fell into a second career of private investigator in the stark Arizona desert around Tucson. Someone is killing the Indians who live in the area and Rodeo Grace Garnet returns from a brief vacation to find a body of one of them near the entrance of his remote home.  He’s offered a day’s work to investigate the death of another one and, since he’s always in desperate need of money, takes it even though the person retaining him is strangely uninterested in the outcome of his research. The body count rises considerably before he can identify and stop the killer.

I found this book intriguing in its original characters and matter-of-fact presentation of gritty details. No drama here, just the facts. His lack of money for instance:  he visits the local store which serves as a pawn shop and notes to himself that several of his possessions are on display, implying he’s had to pawn them for cash. I especially liked Rodeo’s kindness. He keeps water and food in a cave that he knows is used by undocumented immigrants crossing the U.S. border from the south, saying he can’t stand the thought of people dying in his back yard. His devotion to the old dog he won in a poker game is wonderful, spending money he doesn’t have on medicine and vitamins for him.

However, the author’s aversion to quotation marks made it a challenging read, as I could not always tell when dialog stopped and narrative began. The reason for omitting standard punctuation is not clear. The story would have been just as compelling with it.

I love books set in the Southwest United States. Steven Havill’s Posada County books are a particular favorite. Why I, a child of the lush green Ohio Valley and a long-established transplant to rolling Virginia hills, should be so enthralled by printed descriptions of sand and unbearable heat is a mystery. I am looking forward to more from this author.