The Gentlemen’s Hour by Don Winslow (Simon & Schuster, 2011) is the second book about Boone Daniels. Boone is a former police detective turned private investigator and part of a close group of early morning surfers who begin each day at their favorite part of the San Diego beach before they go to their workplaces. Changes have come to the San Diego surfing scene, as all up and down the beach newcomers are arriving to take advantage of San Diego’s beautiful geography and a vocal group of residents is determined to drive the intruders away, destroying the sense of idyllic community that Boone loves. 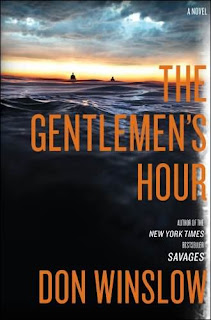 A surfing legend is killed in a confrontation with some of these resident ruffians, and the perennially broke Boone is pulled into helping with the accused killer’s defense. His friends are aghast and turn against him, while he begins to question the statements of the witnesses who say they saw the incident. The defendant is singularly unlikeable and uncooperative, leaving Boone nothing to go on but his instinct that the attack did not go down as described.

Fast-moving, well-written, logical wrap-up to the plot threads which have some nicely intricate twists. Underneath the straight-forward detective story is a plaintive lament about the inexorability of change that will resonate with almost everyone.

Anyone unfamiliar with surfing will find an unofficial introduction to the sport woven in among the investigation of crime.  Lots of surfing buzzwords. I tended to skim over some of it but it was not unduly intrusive to the main story and water sports fans will love it.

This story reminds me of the Rockford Files, including the not particularly suitable love interest.  Kirkus starred review, Booklist starred review.

Aubrey Hamilton © 2017
Aubrey Hamilton is a former librarian who works on Federal IT projects by day and reads mysteries at night.
Posted by Kevin R. Tipple at 12:30 AM