Went this afternoon and saw Sandi and she is doing better. Her other main cancer doctor was there and says that all the tests come back good on the liver, kidneys, as well as the pancreas. If anything was going on, the blood dialysis deal seems to have worked and addressed things a bit. He wants to talk to Sandi’s main cancer doctor to see what he wants to do about restarting chemo. He also wants to discuss with him of they are going to do another blood dialysis treatment or not. My sense was he felt it was okay to go back and start chemo again ASAP, but wants to discuss things with her main guy. 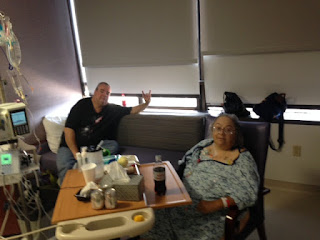 What they refer to as scalp lesions and are tumors have shrunk. The one on her tonsil has shrunk, as has the one in the right side of her neck in the lymph node. They think the sinus one is unchanged, but have not done anything imagery wise to confirm that. The others they can see and feel so they can tell what happened. The sinus one they can’t see and her symptoms have not changed so they figure it is still the same. Of course, with no imagery, they have no idea the status of the dozens and dozens of other tumors scattered throughout her body according to the recent PET Scan are doing now either.
She was sitting up when we got there and asserting herself as she told staff what she wanted and how she wanted things done. Sandi is not a meek patient and never has been going back decades. She wants to do her thing and do it all her way. Even the doctor was laughing about it and said that was proof she was doing better. As a result, he is expanding her diet a little more and seeing how that goes.

Physical therapy wants her up and walking the halls and she is not having it until they pull the catheter. They have no plans to do that yet, so she isn’t walking because she has had very bad experiences trying to do physical activity when it is in. Knowing that I don’t blame her, but those in charge of her want to do what she is told and she is not in the mood for that one bit. 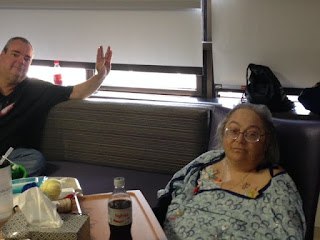 For the first time in about a week, she is back crocheting stuff—cat toys in this case for the City Of Plano Animal Shelter—though you can’t see them in the picture. She wants out, but clearly is not ready for that. I have no idea right now when they would let her out as another blood dialysis treatment would not happen until Monday at the earliest if they do that. I specifically asked and the doctor today was not sure if they have to start the chemo over from square one—that means five days when they start—if they can just pick up where they left off which would mean about three days. Clearly, I am not a doctor nor do I play one on television, but since the blood dialysis deal was done to strip chemo out of her body and that includes at least some of the good or correct chemo, it seems to me they would have to start all over. But, I don’t know and they don’t have that figured out yet.

So, that is where we are at as of today. I think we have turned a corner on this latest crisis. Yes, the docs, nurses, and drugs did a lot of work, but I think the many thoughts, prayers, and well wishes from all of you played a major role in saving her. I honestly thought a few days ago we were going to lose her. Thankfully, that did not happen. And we thank you, many of you we have never met, for keeping her in your hearts and minds and willing her through this. Thank you.
Posted by Kevin R. Tipple at 4:09 PM

Bad patient = good news. ;-) So glad to hear this. Whatever else is going on, at least she is feeling better.

Your bravery is inspirational, Kevin.

When she starts getting annoyed by others, things are getting better. I don't think I am brave at all. It is what it is and I deal with things as best as I can. She is the one fighting an evil that is insidious and won't just die.

I've said it before: she's a miracle woman.

That she is. One of her nicknames over in Texas Oncology is WONDER WOMAN.

Awesome! Tell Wonder Woman I said hello and that she is an inspiration for us all.

Wonderful news, Kevin. That urge to have her own way not only means she is feeling better, it is why she has survived so long. You and she and Scott are in my prayers. Bless you and give you strength. I know you don't feel well either, but you are persevering.