Relic Tech Class 4 Transport Security Specialist Krakista Keesay has a significant problem. Actually, he has several problems and they are all very significant. Employed by the Negral Corp and assigned to the transport ship Kalavar, Keesay has been seriously injured as Relic Tech: Crax War Chronicles Volume 1 by Terry W. Ervin II begins. He has no memory of how he sustained those injuries. He has no memory of ever being onboard the Kalavar. 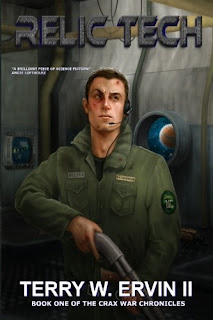 He is accused of numerous crimes, including treason, and is accused of being responsible for the deaths of over 100 military and corporate personnel. He has no memory of any such actions either. Due to his injuries as well as the fact he is heavily restrained, fleeing is not an option. With no memories, he is unable to refute the charges against him. He also does not care for the option strongly suggested by his appointed legal counsel to plead guilty because the evidence against him is insurmountable.

He is aware that things are not right though he has no real clue as to what is wrong. His only option is a very dangerous plan using alien technology. An ancient alien race known as the Umblegarri assisted mankind years ago with becoming part of the intergalactic community. This was before the Silicate War. One of their capabilities is an A Tech-- or advanced technology – machine known as Cranaltar IV. A brain scanning instrument that has the ability to retrieve and store the memories of the subject in the machine. These memories can then be displayed through various means. It also has a tendency to scramble the brains of human test subjects.

Keesay, by invoking his right to be scanned may prove his innocence, but he could also be permanently damaged if he survives the encounter. He might prove his innocence, but he also could easily have no mind left afterwards. It is a risk he is willing to take. Assuming he makes it alive to the small moon of Io to undergo the scanning. Between his health and the forces against him that need him dead to keep the secrets in his head hidden nothing is assured.

Published in 2013 the first book of a new series by author Terry W. Ervin II, Relic Tech: Crax War Chronicles Volume 1 is a combination political/ espionage and science fiction alien invasion war book. While plenty of reviews note the western style aspects of the read, those same reviews seem to miss the political/espionage elements also strongly present in the book. Blending science and history along with plenty of creatures one never wants to meet, Terry Ervin has created a far flung space opera style science fiction read set far in the future with plenty of mystery and thriller elements along with the previously mentioned elements. While it is clearly science fiction, like many of the author’s other works, the tale has elements of nearly every other genre heavily present throughout the work. At over 400 pages, the book certainly isn’t a fast read, but there is plenty of action, intrigue, and various attacking creatures as well as plenty of other things to keep the reader turning pages. You won’t be bored.

Like the very good Flank Hawk series that I also strongly recommend, Relic Tech: Crax War Chronicles Volume 1 is a very good read and well worth your time.

Material provided by the author long ago in exchange for my objective review. The second book in the series, Relic Hunted is in my TBR pile.