When I was a kid growing up, my Dad had his office out in room in the garage. It was sacred and very much off limits to us kids until we were in our late teens. Even then, like the living room, one did not go there without the parent. After Dad passed over five years ago, I tried to get Mom to let me start working on the piles of things out in his office and elsewhere in the garage, but she absolutely refused to let me touch it.

With us moving to the house over the next few weeks there are many things to do over there including working on the office. Over these past weeks I have been slowly clearing out Dad's technical manuals dating back to the fifties, his treasure trove of teaching materials dating back that far, and lots of other stuff to make way for my stuff. Yes, though it is impossible to be out there any length of time during the summer months except for very early in the morning as it is not air-conditioned, it is going to be my office.

Today Scott and I made three trips to the house and back as we carted over a lot of stuff including some of my books. I have maybe half of my books over there now. So, if you ever sent me a book for review and it has not been reviewed yet, it has company at the house just as it did here. 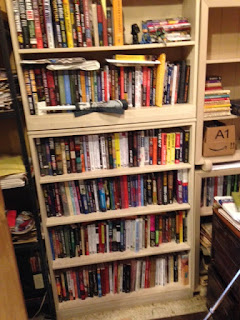 Email ThisBlogThis!Share to TwitterShare to FacebookShare to Pinterest
Labels: books

Nice to know you're moving to your former home. I hope it is all one-story so you no longer have to struggle up and down stairs. Surely property taxes and insurance on the house will be much less than apartment rent. You do know to get a homestead exemption immediately, don't you? In addition to protecting your home, it lowers the property taxes. There is an additional exemption if you are disabled that will also help on property taxes. I'm sure you know this, but you are not much older than my kids and I feel compelled to act as Mom.

Built in 1960 by Fox & Jacobs, it is a one story three bedroom two bath house. I can't get anything exemption wise until probate clears. I know there are exemptions that we will qualify for, but the who deal still has to go through probate first.

Kevin, I'm so happy you & your family are moving to the house you grew up in!!! It is a huge load off many people's minds. That said, moving is a real chore especially with books. 20+ years ago, an old boyfriend & I split up & I allowed him to take a lot of the books, which I then started to miss more than I thought I would. Have been replacing them, a little at a time.

In Erie County, N.Y. we have something called HEAP or LIHEAP, which around here mainly pays for heating-related expenses but also will provide an air conditioner if the family's income is below a certain level. This program is administered by the county, but the money itself is all federal funds, which Drumpf & the R's want to take away but haven't yet been able to. You might look into something like that.