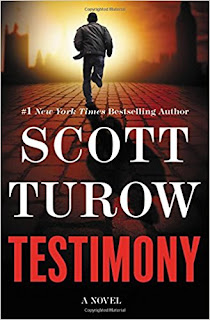 In Testimony (Grand Central Publishing, 2017) Scott Turow leaves behind the familiar territory of Kindle County, the location of nine of his previous books, for the byzantine world of international diplomacy and the investigation of war crimes in Bosnia. In his early 50s, the protagonist William ten Boom is determined to make his life over. His marriage has ended, his children have launched, he’s resigned from his partnership in a solid law firm, and when he’s approached to join the International Criminal Court in The Hague, it seems to be the logical next step.

A member of the Romani, the European itinerant people we call Gypsies, has come forward and testified to the ICC that he witnessed the mass murder of an entire Roma community, 400 of his family and friends, at the height of the atrocities in Bosnia in late April 2004. A group of men dressed in Chetnik uniforms forced them all into transport vans and they were never seen again.

Ten Boom is hired to lead the investigation and to prepare to prosecute the perpetrators if they can be identified. In addition to the Serbian paramilitary, some of the rumors suggest that it was carried out at the behest of the mad President of Bosnia who plundered and terrorized the nation until he was driven into hiding. Some blame rogue members of the U.S. Army, who they say killed the Gypsies in revenge for their theft of military equipment. The Russian Mafia is mentioned. Yet other rumors said the entire community simply relocated. This suggestion is given little credence as no member of the community had been heard from in the more than 10 years since the incident.

Ten Boom is immediately plunged into a medley of cultures and the nuanced pace of global diplomacy in The Hague. His lead investigator is a heavy drinking Australian who turns out to have a doctorate in forensic anthropology. He is intrigued by the lawyer representing the lone survivor of the massacre and his relationship with her is a major thread of the story in addition to the investigation. Another thread is ten Boom’s discovery of relatives in the Netherlands.

When I need a reliably engaging read, Scott Turow is on the short list of authors I look for. I was surprised to see the subject of this book but found it interesting. It is unusually long however, nearly 500 pages, much of it due to ten Boom’s interior monologues, which are perceptive but not what I expect in a legal thriller. The ending, which has a nice twist, suggests we might see more of ten Boom in the future.