Saturdays with Kaye: The Marriage Lie by Kimberly Belle

The Marriage Lie by Kimberly Belle 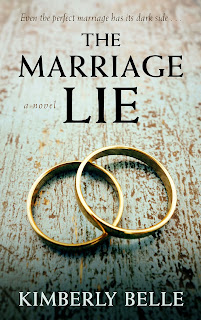 I started reading this while I was in the Atlanta area, by happy coincidence. Will and Iris have been married for just over seven years, but Iris itches only for Will. She considers their relationship still thrilling. Instead of “I love you,” they tell each other, “You are my favorite person on the planet.”

A year ago they bought their dream house in Inman Park, an expensive and historic district in Atlanta, even though the price means it will remain mostly unfurnished for a few years. All goes well and their lives hum along, hers as a counselor at a private school, his as a software engineer—until Will, who is supposed to be on a business trip to Orlando, is reported dead from a plane that crashed on its way to Seattle. Iris goes through the mourning process, starting with denial. That starts to end when she finds that the conference Will was headed for doesn’t exist. Then she learns that he actually bought tickets to both Orlando and Seattle. Anger, the next stage of grief, bubbles to the surface. She redirects it at Liberty Air, the airline whose plane crashed.

Her twin brother Dave moves in to help her through this. Iris, Dave, and their tough dad meet with a representative from the airline, Ann Margaret Myers. When Myers offers Iris a settlement, her anger explodes and she rips up the check.

When she begins to uncover secret after secret that her husband had kept from her, she begins to have trouble mourning him, realizing she didn’t know who he was. As she discovers more about him, her shock increases and the dark past reaches out to snare her.


Reviewed by Kaye George, Author of Death on the Trek, for Suspense Magazine.

Kaye, you didn't say how you liked it. I thought it was a terrific book. I got it by accident, as I do most standalones by authors unknown to me that I read (unless recommended by friends or reviewers I trust), but I decided it was a keeper.