Saturdays With Kaye: City of Strangers by Louise Millar

City of Strangers by Louise Millar 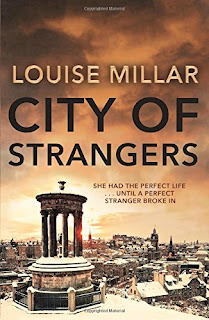 From the land of Agatha Christie comes, instead, a suspense writer worthy of Patricia Highsmith. Any city can seem like a city of strangers, especially when, like Grace Scott, one returns to it after her honeymoon and it no longer holds one who was dear to her, her beloved father. She misses him with an ache her new husband can’t assuage.

When they get home, Mac goes out to get groceries and she enters the new apartment alone—and finds a dead man. She’s a journalist and her camera helps her process her thoughts, so she quickly takes some pictures, then dials the police.

The reader learns, right away, of Mr. Singh’s newsagent shop below the apartment, and the presence of a mysterious man in the storeroom. We revisit him throughout the book as his mental state deteriorates. Grace feels a connection with the poor dead man, as she thinks of him, who has been killed in their place and tries to follow any progress on finding his killer. Mac is much too busy, supervising the conversion of a warehouse into flats, with a restaurant and gym, and a bar-slash-photography-studio-slash rehearsal space.

But the authorities make slow progress. They don’t know the man’s name. She finds a discarded envelope addressed to her. On it, he, or someone, has scribbled the words: I am not that man Lucian Grabole. Running alongside this story is one of two people found dead in other places. One is said to be an Australian tourist and one a drug dealer. Grace, convincing her boss to let her work on the story, embarks on a quest for missing pieces of the puzzle, makes astonishing discoveries, and begins to question everything she knows.

Meanwhile, back in England, the mysterious man still crouches in a small space one floor below her new apartment, hiding.

Lucian Grabole proves to be as illusive in life as in death. Can she trust the people who say they’re helping her track down who he was?


Reviewed by Kaye George, author of Requiem in Red, for Suspense Magazine