Barry Ergang Reviews: A MAJOR PRODUCTION! (2018) by Thomas B. Sawyer 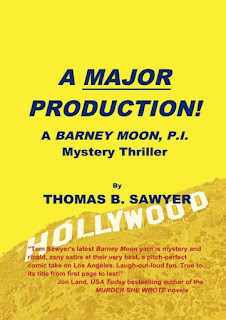 New Yorker Barney Moon, private investigator, hates Los Angeles, a city for which he has a number of unflattering appellations including “Whackoville,” “Tinselburg,” and “Goofyland.” But after clearing up a case for a client of the Eller Insurance agency, one involving a corrupt judge and an incriminating file labeled Stuff, Barney gets a phone call from his old friend Saul Flockman. A hedge fund manager, he and Barney exist “in distant worlds, largely out of touch except for several instances of Saul’s personal stress during which he had hired Barney for domestic surveillance.” Saul constantly worries that his actress wife Wanda Gooden is playing around on him, and has on three prior occasions hired Barney to check up on her. Barney has yet to catch her “in anything even approaching compromise or lying.”

Now Saul wants to hire Barney again, and for the same purpose. One of Saul’s clients, Hollywood agent Irwin Kerner, has told Saul that if he—Saul—invested half a million dollars in an independent film production, Kerner could get Wanda a good role. The production company is Ganell Films, about which Kerner has been unable to find any information. Wanda has gone to L.A. to try to learn why her part hasn’t yet happened.

Saul explains that over time, Kerner has come to owe him over a million dollars—money he paid the agent to help along Wanda’s career. He suspects Kerner has gambled it away at “casinos and the like.” But as much as he needs to recoup his losses to Kerner, Saul needs to know if Wanda has been cheating on him with the agent. He also knows Barney hates L.A., and is willing to double the usual fee plus a bonus, also figuring the job will be a quickie: “red-eye out, red-eye back.”

Barney feels for his friend, but also “knew himself. That no matter how simple his cases were, there was almost invariably something else that would catch his eye—and his curiosity…a kind of a fatal flaw.” But because both Saul and Wanda are friends, he curses and takes a flight to Los Angeles.

Having grown up and lived most of his life in New York City, Barney has never learned to drive. Thus, he must avail himself of the services of the lovely Melodie Seaver, whom he’s known from a prior visit to L.A. With her chauffeuring, he stakes out Kerner’s home, then Kerner at a Rodeo Drive restaurant with Wanda, and later Kerner’s office. At the latter he observes an attractive woman who emerges and burns some papers, after which he goes inside to case the office himself and rifle it for some evidence for his friend and client, Saul Flockman.

When he cautiously returns to the car, police vehicles and sirens having pierced the vicinity, Melodie tells him she witnessed the shooting death of the woman whom Barney had earlier seen outside of Kerner’s office.

What ultimately ensues and keeps Barney an unhappy professional captive in Cloud- Cockamamie-Land, in part because of his aforementioned fatal flaw, is his inadvertent embroilment in situations that involve, among others, the mechanically-skilled brothers Cory and Pete Bilchek; drug dealer and money-launderer Renaldo Esteban and his crew; fledgling screenwriter Jonah Whiting, and Homeland Security Agents Vincent Rogers and George Lippet—all while trying to solve the murder of Phyllis Carridi, wife of powerful mob boss Angelo Carridi. Caught between Carridi and the cops and D.A., and up against a literal deadline, Barney will need all of his wits to figure out everything that’s going on in this entertaining rapid-fire amalgam of thriller, whodunit, and screwball comedy.

The version I read was a digital advanced reading copy which contains some typos and other errors, the biggest problem being a plethora of incorrect punctuations. I hope and assume an editor/proofreader corrected them in the paperback and electronic final editions.

Some of Derringer Award-winner Barry Ergang’s work is available at Amazon and Smashwords.