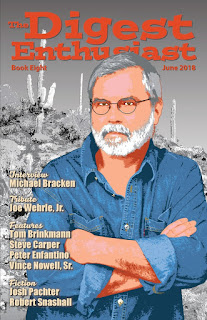 The Digest Enthusiast: Book Eight distinctively features prolific short story author Michael Bracken on the cover. Edited by Richard Krauss and published by Largue Press, the issue opens with a roundup of current story and feature lineups in the mystery, science fiction/fantasy digests and other news.

Starting on page 16, Editor Richard Krauss interviews Michael Bracken in considerable depth regarding his writing career and background. Included in the far ranging interview is how Mr. Bracken goes about the writing process, how some of his published works link up in terms of location and/or characters, and how his writing has appeared and continues to do so across multiple genres. Naturally, such an in depth discussion of the writing process also features his editing work and future projects.

That far reaching interview is followed by “Manhunt 1953 part three.” Peter Enfantino summarizes the issues of Manhunt: Volume 1 No.9 September 1953 to No. 12 December 1953 and gives a brief recap of each short story starting on page 35.

A fantasy short story featuring the power of toy soldiers titled “Junior and the Little Guys” by Robert Snashall begins on page 46. Junior Tward has a tough time at home and at school. His only escape is his toy solider collection. A very special collection that has the power to help him as well in a very entertaining tale.

Vince Nowell, Sr. considers the first issue run of Gamma starting on page 56. In the piece, “Gamma New Frontiers in Fiction” he charts the publication’s short run from June 1963 to 1965. He does so by providing an overview detailing why it stood out as well as synopsis of each issue and the print format changes made to the publication as each issue came out.

After some comics by Bob Vojtko, Tom Brinkmann goes into considerable depth in the life and death of Playboy Playmate Connie Kreski. Tied into the article are synopses’ of various magazines and other publications that featured her in some way. “The Connie Kreski Conundrum” feature begins on page 68.

Many people seem to believe that it is only ezines that release one issue and then vanish from sight. That is not the case at all as you can learn starting on page 83 with Steve Carper and his “One-and-Dones part two.”

Editor Richard Kraus takes over on page 97 with his tribute piece titled “The Creative Worlds of Joe Wehrle, Jr.” The tribute and appreciation piece extends far beyond the work he did for The Digest Enthusiast.

It is back to fiction next with the reprinting of a short story by Josh  Pachter. The story, “The Defenestration of Prague” originally appeared in the June 1986 issue of Espionage. At that time there was a printing error which has been noted and corrected for the printing here that starts on page 114. The second part of the story will appear in the next edition of The Digest Enthusiast where readers will learn the fate of Mckenna and much more. 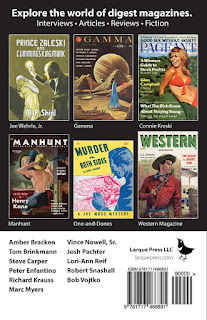 Starting on page 125, Peter Enfantino makes a second appearance in the issue as he recounts the history of “Western Magazine.” Filled with short stories and novels of 15k to nearly 30k, there was clearly plenty of reading in each issue starting in July 1956.

“Opening Lines” comes next starting on page 151. It features a compilation of the opening sentence of numerous short stories appearing in the various digests featured in this issue.

“Links” for the publisher/magazine and some of the people in the issue follows the “Opening Lines” page. The list also includes in alphabetical order the names of the current digests operating and their location on the World Wide Web. For all intents and purposes this is the end of the issue as that is followed by three pages of ads for various books and the publication itself.

According to Amazon, I picked this up on May 22, 2018. As to the why, I did it solely because Michael Bracken was on the cover. I wanted to read what he had to say because whenever he has an opportunity to talk about writing the resulting piece is always informative. As I try to find my way back to my own fiction after the death of both my mom and my wife last year, the very difficult struggle is helped by reading of the successes of those I admire and the respect.

Beyond the Michael Bracken interview itself, which was most definitely worth the price of the read, there was/is plenty of other very worthwhile informative and entertaining pieces in The Digest Enthusiast: Book Eight. The short stories were very good. I also I enjoyed learning about magazines and people that were before my time or later when I was a small child bouncing of the walls of this old house from time to time. As I bounce of the walls of this old house now as a disabled adult, I am more aware than ever of the passing of time and the loss I have personally experienced, but the loss we all suffered whether we knew it or not as these digests and people involved vanished from our world.

Material was picked up to read and review using funds in my Amazon Associate Account.

Thanks for the overview, Kevin. I have this digest in my Amazon cart (among many other periodicals and DVDs) and you've convinced me to order it!

Cool! Good to know that my reviews still help somebody.

Thanks for your thoughtful review, Kevin. Much appreciated. Michael gave us a terrific interview and next issue we'll feature a new short story by him with art by Michael Neno!