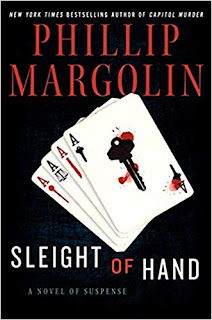 Sleight of Hand by Phillip Margolin (Harper, 2013) is the fourth legal thriller with Dana Cutler, a Washington, DC, private investigator as the lead character. That she was the primary character wasn’t immediately apparent, as soon after the book opens she is sent off on a trip to the Pacific Northwest on an odd but well-paying quest for a relic of the Ottoman Empire. She leaves the stage to Charles Benedict, a smooth attorney who represents drug dealers and crime bosses if they have the money. For the very well-heeled among his clients he privately offers additional services, such as making witnesses disappear. He is known for his high success rate in winning the cases he takes on.

Benedict is doing just fine until he decides to perpetrate a little blackmail on another high-powered attorney. During the struggle over a DVD with incriminating video the lawyer does not want her husband to see, Benedict accidentally kills her. He then has the brilliant idea of framing her husband for the murder and then convincing him that Benedict is his best option for legal representation. His plans are unfolding nicely until Dana returns from her trip to Washington State and realizes one of her investigations is linked to the murder case in the news headlines.

Benedict is one of the most repellent characters I have encountered in years. I actually put the book down about a quarter way in. I picked it up again to check the ending before I returned it to the library and found enough in the plot to keep me reading. Margolin is a practicing attorney with years of experience, and it shows clearly in the detailed trial preparations and courtroom scenes. He has written seven other books in two additional legal series and about a dozen stand-alone thrillers and mysteries. Reviews suggest this one is not among his best but I eventually found it to be an entertaining read and will keep his name on my list to re-visit as time allows.