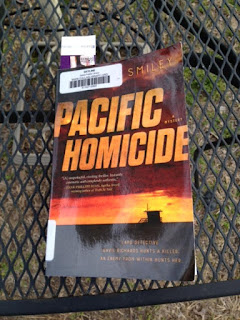 Detective Davie Richards has a nasty case to deal with as Pacific Homicide: A Mystery by Patricia Smiley begins. A women’s body has caused a shutdown at the Hyperion Sewage Treatment Plant. Naked and with no jewelry, Detective Davie Richards and her partner, Jason Vaughn, have to figure out who she was and how she got into the Los Angles sewer system to be caught in the workings of a rotating grinder. She could have gone into the system almost anywhere in the vast service area. With no clothing or any distinguishing features, other than the spider web tattoo on one arm which might mean something or it could be nothing, it seems almost impossible to identify her.

After some work, Detective Davie Richards learns that the woman’s name is Anya Nosova. She’s from Ukraine and her short life has ended before she will see twenty or go home again. What happened to her and why is just part of what Detective Richards needs to figure out.  That is assuming she is going to be allowed to continue to work on the more and more complicated case. Her ability to do her job, let alone be free and not locked up in prison, depends on if the ongoing use of force investigation into her recent shooting situation ever ends. Not only does Detective Richards know that everything she has done from the night of the shooting to now is again being scrutinized, her actions on this murder investigation which is her first as lead detective, mean the brass and others are watching more than ever.

Pacific Homicide: A Mystery is a fast paced read that is part mystery and part police procedural. Readers follow the point of view of Detective Richards and numerous others as things in the two cases escalate. Of course, crime does not happen in a vacuum so there are other police situations that interplay with the two primary storylines as does the personal. Some of that is a bit clichéd, though it does work well and fits into the overall tale seamlessly. Quite a bit is going on in Pacific Homicide: A Mystery” by Patricia Smiley and it is a very good ride.