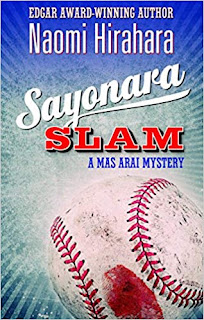 Sayonara Slam by Naomi Hirahara (Prospect Park Books, 2016) is the sixth book in this award-winning series led by an irritable semi-retired Japanese-American gardener in his 80s named Mas Arai who just wants to be left alone. Instead, his daughter, son-in-law, and grandson live with him, interfering with Mas’s potential plans to ask his girlfriend to move in with him and generally complicating his life.

The son-in-law has finally gotten a good job as head groundskeeper at Dodger Stadium in Los Angeles, and Mas is helping him out during the World Baseball Classic series where Korea and Japan are playing. An obnoxious Japanese sportswriter from an unsavory publication drops dead among the crowd of spectators and journalists jostling for position near the dugout. Mas ends up answering questions from the police instead of watching the game, since he was helping pass water among the group.

The grandson of Mas’s childhood girlfriend arrives from Japan a couple of days later ostensibly to take over the dead sportswriter’s job and hires Mas as chauffeur and translator. In reality Yuki is investigating what has turned out to be a homicide. The victim’s computer files are missing and just what he was working on isn’t clear. Some signs point to the dead journalist dabbling in blackmail on the side. Mas’s unwillingness to explain his relationship to Yuki’s grandmother to Mas’s current girlfriend creates a possible turning point in their lives.

This is a leisurely mystery, perhaps not for everyone, no car chases and no shoot-outs, but it is a fine read about people who sound authentic. It holds a great deal of history woven into the background of the story, Japan and Korean political relationships, Hiroshima and World War II survivors, prisoner exchanges, but none of it obtrusive. Other reviewers suggest starting at the beginning of the series for a fuller picture of the characters and their backgrounds.

Sounds interesting. Is it necessary to read the first books in the series to enjoy this one. It does not sound like it from the review.