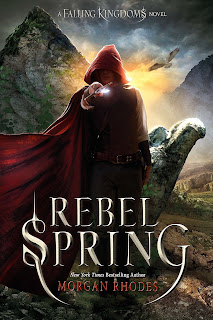 Rebel Spring by Morgan Rhodes is second book in the Falling Kingdoms Series where King Gaius seeks to build a road through his united land to help find the Kindred. That road will be built through the Forbidden Mountains and there will be problems.

That is easiest part of the plot to explain without ruining the novel. It is very similar to the first book, Falling Kingdoms, but not as good. Every character except Prince Magnus makes incredible stupid decisions that most readers know will backfire and cause more pain to these characters. It is hard for me to root for characters when they are stupid and make really bad decisions that they have had plenty of time to think about before they do the stupidity.

I get they are young, inexperienced leaders, going through extreme trauma, but one should not what to slap the characters while reading a book. This is especially true when the characters are supposed to be smart. One so called good character, Jonas, remains unlikeable for me and this is despite how many people in the book gush about how great he is. He makes very bad decisions that get people killed, asks forgiveness for getting people killed, and then does it again and again. He gets more than 20 people killed because they followed him on another one his “plans” that goes very wrong. Anyone who disagrees with him he either threatens or yells at and he hurts everyone, including his close friends. He is not a leader, but a bully who is supposed to be a good guy according to the plot of this book and the overall story arc.

Then there are the numerous clichés in this book stolen from other books. The ones here are very rampant in number and far more obvious than the preceding book and therefore much harder to ignore.

On the plus side of things, I still like how they show multiple scenes from the different perspectives of the various characters. I like how the author has each character explain his or her thinking at the times of various things and does it in a way that further builds out the character. I also like how the characters’ opinion of other people can change, but sometimes the changes are way too dramatic. That change can lead to romance and the various romances in the book seem forced and two have other disturbing issues. 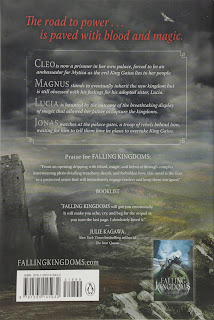 An adult character being in romantic love with a character that they have known since the person was a child, is disturbing to me. Beyond the whole decades apart on age thing, the idea that an adult develops romantic feelings for a person he or she has known since they were a baby is very weird and rather gross to me.

I was also bothered by a romance that sprung up by way of a violent origin. One character has been repeatedly kidnapped, threatened with death, was even injured, and now has suddenly fallen in love with the kidnapper. That feeling is mutual as the kidnapper is now in love with the character after doing repeated horrible things over many months to the victim. Their romance is apparently some sort of Stockholm Syndrome deal though that does not really explain what is going on here. Then there are the numerous romantic relationships based on barely knowing the other person for any length of time and suddenly they are in love. Not lust, but full bore love connections.

Someone needs to tell the author every character does not have to be in love. It is ridiculous.  Out of more than twenty main characters, only four are just friends.

I was disappointed by Rebel Spring: A Falling Kingdoms Novel by Morgan Rhodes. While these same issues were hinted at in the first book that I enjoyed, they were far more prevalent here and were major stumbling block to the read. I stuck with this book hoping it would get better. I do intend to read the third book in the series that is billed as young adult, but won’t finish it or the series if this is how the series is going to be as there are far too many issues to ignore.

Book supplied by the good folks of the Dallas Public Library System.