Aubrey Hamilton Reviews: She Lies In Wait by Gytha Lodge 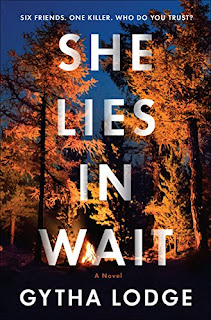 She Lies In Wait (Random House, 2019) is the first novel in Gytha Lodge’s series featuring Detective Chief Inspector Jonah Sheens. Set in the New Forest area around Southampton on the southeast coast of England, it carefully outlines the investigation into the murder of a 14-year-old girl who disappeared 30 years ago, when her remains are found not far from the camp ground where she was last seen.

Aurora Jackson is the youngest of the seven teenagers who go camping after school term ends. Her sister didn’t want her along but the others in the group make an effort to look after her and include her in their activities, up to and including showing her the large stash of Dexedrine that one of them hid nearby.

Jonah Sheens was a newly qualified constable when Aurora disappeared and helped in the search for her. He was just a few years ahead of the group in school and had passing acquaintance with all of them. He knows immediately the identity of the set of disintegrating bones when it is discovered, and dental records confirm it.

Sheens and his staff review the entire original case file, looking for discrepancies, then interview everyone again and compare the new statements to the first ones. Not surprisingly, there are differences and they serve as jumping off points for deeper investigation. The story structure of alternating chapters from the night Aurora disappeared with chapters describing present-day police activity serve the dual purpose of moving the story line forward while building suspense. Although the combination of teenagers, drugs, and alcohol suggests a predictable outcome, how Aurora died isn’t revealed until the very end.