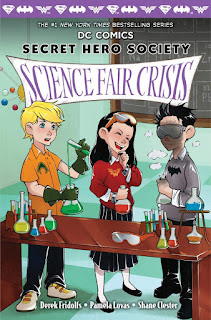 Secret Hero Society: Science Fair Crisis by Derek Fridolfs, Pamela Lovas, and Shane Clester is a book aimed at the middle school or pre-teen reader.  It comes to readers from the DC Universe and features the superheroes when they were kids and members of the “Junior Detective Club.” The members include Batman, Superman, Wonder Woman, The Flash, Aquaman and other superheroes when they were kids and investigating mysteries around their school. Secret Hero Society: Science Fair is the fourth book in the series and this time the science fair is at risk because somebody keeps sabotaging it.

The story is presented through various ways by using letters, illustrations, journal writings, texts, emails and more. This book is fun and has an enjoyable story featuring cameos of good and bad people from the DC Universe where here they are students, teachers, and more. There are various jokes made that if a person is familiar with the DC universe are funny. While the artwork in this one is not nearly as good as the earlier books, the characterizations established earlier in the series remains true

Therefore, it does make sense that a middle school aged Batman is very interested in forensic science and is always very secretive and a young Aquaman is interested in sea life and is part of the swim team. This deal works with the adults as well as James Gordon, instead of being a police captain, is a strict and fair principal. Alec Holland (aka Swamp Thing) is a biology teacher with a focus on plants. One of the PE teachers is the mercenary known as Sports Master and is really good at sports. Here he is on the straight and narrow. In the comics where he is also really good at sports, he wears a hockey mask and uses his sports skills to commit crimes. 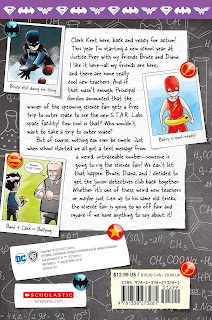 Basically, this book and series is just a kid appropriate version of the Justice League. In these tales, the authors deal with subjects important to the primary reading audience such as bullying and other school problems. Those issues are raised in the background while a pretty good mystery keeps kids reading. If you have a child who likes mysteries and the DC Universe, this kid friendly story would be a good match. Secret Hero Society: Science Fair Crisis by Derek Fridolfs, Pamela Lovas, and Shane Clester is just fun.

This October, the fifth book in the series titled, Secret Hero Society: The Field Trip Disaster by this same writing and artwork team. The series begins with the 2016 book, The Study Hall of Justice.

Material supplied by the good folks of the Dallas Public Library System. My copy came from the Skillman Southwestern Branch.