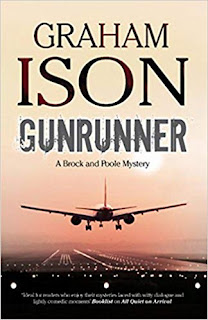 Yet another British detective series I did not know and must add to the TBR list. Beginning in 2001, Graham Ison released 16 books featuring Harry Brock and Dave Poole and has three other series, all capitalizing on his career in Scotland Yard. In these stories Harry Brock, a divorced detective chief inspector, and Detective Sergeant Dave Poole, whose family hails from Jamaica, serve on the Homicide and Serious Crimes Command in London.

Gunrunner (Severn House, 2011) is 11th of the titles. Harry Brock is all settled in for a gourmet Christmas feast with his girlfriend and her parents when he’s called to a Heathrow car park. One of the attendants has gotten around to checking the cars, a task ignored during all of the office parties during the past day or so, and found Kerry Hammond bloodily dead in her Jaguar. She was to have accompanied her husband to New York City, and suspicions are raised when the investigators discover he went to New York without her.  While they wait for the husband to return, Brock and Poole visit the trucking company Kerry inherited from her first husband and that she has continued to run successfully. They learn the company has been investigated for smuggling liquor and Gary Dixon, the driver responsible, was let go months earlier after being convicted and fined. Yet his phone number is in Kerry’s recent calls log and his fingerprints are in her car. Dixon immediately moves up in the interest of the detectives, along with the husband, whose real estate business, it turns out, isn’t going all that well. Then there’s the sketchy owner of a sleazy nightclub where Kerry Hammond spent a lot of time, who claims to be Spanish but doesn’t understand a word when one of the detectives starting questioning him in that language. One of the directors of the transport company had expected to receive ownership of the company when Kerry’s first husband died and is afraid that her current husband will inherit it now, and the suspect list keeps on growing.

Brock and Poole are methodical and sound in their interviews and in their investigation, which brings a couple of surprises along the way to a solid and satisfying conclusion.

This sounds good. I just put the first two in this series on my library someday list.