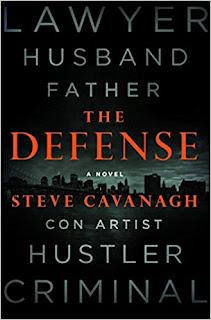 Steve Cavanagh’s fourth book about Eddie Flynn won the Theakston Old Peculier Crime Novel of the Year in July 2019 amidst formidable competition, which says just how good a read it is. Since I hadn’t encountered Eddie previously, I started at the beginning with The Defense (Flatiron Books, 2016) and found it an excellent legal thriller as well as a witty story of a resourceful con man trying to go straight and giving up when a law-abiding life couldn’t protect his family.
Eddie Flynn is a former grifter who learned the trade from his father. He abandoned a lucrative life running scams to attend law school and lead an average life. After a defense case gone horribly off the rails, he sold his share of his law practice and hit the sauce far too hard, losing his wife and daughter in the process. One morning awhile after Eddie began his slow climb back to sobriety, a member of the Russian mafia kidnaps him for a meeting with his chief, who is out on bail before his trial for homicide. The mafia chief Volchek explains to Eddie that he is holding Eddie’s daughter hostage until Eddie gets Volchek acquitted by killing the main witness against him.
In a desperate bid to save his daughter and stay out of jail himself, Eddie resurrects all of his rusty swindler’s tricks to outsmart the Russian gangsters as well as uses his considerable legal expertise to tap dance his way through a murder trial he’s had no time to prepare for. When it becomes clear the Russians have members of law enforcement on their payroll and no assistance can be expected from that quarter, Eddie has no choice but to call on the people he knew in his other life for help. They include his childhood friend who is now the leader of an Italian crime family, with his own agenda where the Russians are concerned.
An original and gripping plot with a host of first-rate characters. The suspense is expertly developed, resulting in some harrowing scenes, for instance, where Eddie scales the front of the old and crumbling courthouse building. Eddie Flynn is an exceptionally fine addition to the ranks of fictional lawyers, and I am pleased to make his acquaintance.
Shortlisted for the Ian Fleming Steel Dagger Award for Thriller of the Year.
Publishers Weekly starred review
·         Hardcover: 320 pages
·         Publisher: Flatiron Books; 1st edition (May 3, 2016)
·         Language: English
·         ISBN-10: 1250082250
·         ISBN-13: 978-1250082251