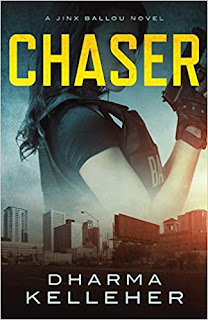 Chaser by Dharma Kelleher (Dark Pariah Press, 2018) is the first book in the Jinx Ballou bounty hunter series, of which the third was released earlier this month. Jinx is a former Phoenix police detective who got tired of the paperwork and regulations and opted for the more free-wheeling and lucrative life of a bail enforcement agent, i.e., bounty hunter. One of the attractions seems to be the creativity required to lull the bail jumper long enough to get handcuffs on him. Jinx likes to role play; she keeps a range of costumes in her car for these occasions, and she enjoys plotting scenarios to use them.

Jinx is also transgender, which forms a major theme of the story. A local reporter outs her in a news article and the fallout from the bail agencies she was working for is so strong and immediate she is without work for the first time in years. In desperation she approaches the one agency owner who is also desperate. This agency is holding the bond for Holly Schwartz, a teenager with a rare degenerative disease, who is accused of killing her mother. Holly and her mother were well-known around the local talk show and charity fundraiser circuits. How a girl in a wheelchair could have killed her mother and then disappeared has been a local mystery. Nonetheless, Assurity Bail Bonds will lose everything if Holly does not appear for her next hearing in five days.

Jinx’s search leads her to a human trafficking ring run by a Russian mobster and an FBI sting operation, as well as a number of other colorful and violent characters. In some amusing sequences she picks up a couple of fugitives wanted by a bond agency that fired her and offers to let them go again, at the agency’s great financial loss, if they don’t pay her despite their refusal to keep her on their staff.

Jinx Ballou is not Stephanie Plum by any means. No one has to rescue her. She plans ahead: she keeps three keys to her set of handcuffs where she can reach at least one at all times. She owns guns and knows how to use them, although I think her inclination to engage in fisticuffs so readily could be damaging long-term. I expect if she stays in the business, she will have to focus more on using her brain and not force if she wants to stay out of the hospital. A dynamic and intense read.